10:26 AM on 04.05.2013 (server time)    0
A few short weeks ago tragedy struck as my PS3 met the same fate my Xbox 360 did a year prior. The aging console (a model 1 80gb unit from 2008) that had been plagued with inexplicable freezing and lock-ups for months finally gave out under the pressure and called it quits. Similarly to my 360 a year prior, it's warranty was well past expired and I simply could not afford to pay for the console's repairs. Admittedly I was initially upset but I decided to collect the deceased console's accessories, controllers and 50+ games and sell them to my local independent game retailers in town to raise funds for a new console. Perhaps against my better judgment I decided my recent income was enough to supplement the cost of a new Wii U ZombiU Deluxe Bundle.

I was initially very excited. It was the first time I had bought a new console in some time and I had forgotten how palpable the thrill of unwrapping a new console was. The promise of something incredible was just around the corner and I hooked up the new hardware while anticipating what would come next. I played the software that came with it and I purchased some more titles from Amazon and Nintendo's eShop. However, while shopping I noticed a distinct lack of quantity in the Wii U's software library. In fact, unless I was mistaken, the game selection hadn't grown at all since the console's release last year. 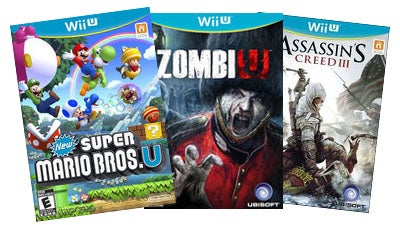 I remember hearing about these titles during the consoles launch last year.

Nevertheless, I continued to play and I found the Wii U to be a great deal of fun. The gamepad made a lot more sense to me in practice than it did during Nintendo's E3 presentations. The console's social features were well implemented and easy to use. In fact, I found the whole experience to be a little intoxicating and the hours quickly melted away as I continued to play more and more. However, I couldn't help but be a little curious about what was coming next for Nintendo's new hardware. As it turns out, not a whole lot.

I took to the internet and read as many Wii U related news stories I could find and what I discovered was upsetting to say the least. The Wii was suffering from a slow release calender in it's last few years but that was to be expected to some degree. After all, Nintendo was gearing up to release it's next flagship console. But for the Wii U to be echoing the same performance after less than a year is just disappointing. I have no doubt that Nintendo will release a handful of great quality titles for the Wii U during it's lifetime that will make the hardware worth owning, I just hope 3rd parties don't give up too quickly due to Nintendo's slow start. Unfortunately, every news story posted recently about the Wii U reads to the contrary.

Left and right developers and publishers can be heard saying that they're reluctant to release software for the console because they view the market for Wii U software as too small or risky. And during this release drought Nintendo themselves have been MIA, unwilling to comment on what the future holds for the Wii U. I know this situation can be turned around and I know that Nintendo is just the company to do it, I just hope that Nintendo doesn't find their footing too late for the console to be home to some great 3rd party content. Do I have buyer's remorse? Not yet, I can't find myself crying foul after so little time with the system thus far. But I understand how Nintendo's customers may feel spurned in light of recent revelations. Still, I want more games.
Login to vote this up!