Video games have constants. Common themes and elements that happen, generally, every time, some more than others. For this reason, it�s easy to get stuck in a rut as you play through a backlog � shuffling from one to the next without much thought. Bioshock Infinite manages to manifest these constants while rising above them at the same time.

The game tells the story of Booker DeWitt, a former Pinkerton agent also present at the Wounded Knee massacre who has incurred large amounts of debt, and must now pay them off by rescuing a girl named Elizabeth from the floating city of Columbia.

�Bring us the girl and wipe away the debt�

It embraces historical tropes of fiction and those of video games. The flawed hero, Booker, struggles with his checkered past, and Elizabeth is poised to play the damsel in distress in need of a big strong man to save her.

But from here, things unravel. Infinite becomes a commentary on these tropes and mirrors Columbia both in exceptionalism and rising above them.

Elizabeth is in no way constrained to the damsel in distress role. Players who feared one long escort mission may find themselves on the other side of that coin, as Elizabeth revives the player and tosses Booker supplies in the midst of firefights. Her incredible power to open tears in space and time force the question -

Irrational has done a wondrous job of creating the most compelling character ever imagined in a game. Elizabeth�s wide eyes are a stark contrast to the enemies rushing at you, reminding us of her depth of character. That intensity can�t be captured by cosplayers � it can only be conveyed properly in this Bioshock art style. Her relationship with Booker is complicated, taking many turns over the course of the game as she copes with your violence, much like our parents cope with the violence in our video games � just one example of the game�s commentary on games. To say much more would involve discussion of the ending, a can of worms that not only goes beyond the scope of this review, but feels sacred enough to keep out of reach of those who didn�t experience it first-hand forever. 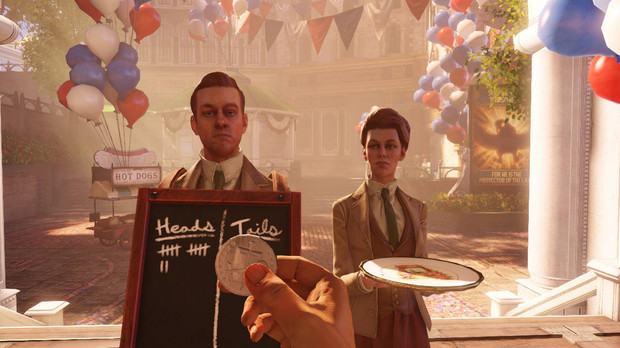 However, a second playthrough won�t be required to illuminate some of the themes, the interpretation of which are left up to the player. In the original Bioshock, Rapture painted a picture of individualism gone wrong � Ayn Rand having her cake and choking on it. The game questioned player choice, but had an obvious agenda when it came to its objectivist critique. Infinite overcomes this with Elizabeth�s tears in space and time. The player gets to experience several realities with various incarnations of the Vox Populi, the working, minority class of Columbia. These multiple explorations of an �Occupy Wall Street�-esque sequence of events suck any �liberal agenda� out of the game.

Behind this ironclad wall of narrative and thematic elements, we�re reminded that Infinite is still a game, if only for the sake of advancing those elements. This manifests itself in the form of what is, astoundingly, a very tight first-person shooter. It would be easy to expect sacrificed gameplay in exchange for everything else Infinite offers, but such expectations would be folly.

Reminiscent of the first Bioshock, Booker is equipped with vigors � essentially super-powers � and guns. There are many of each, and instead of feeling overwhelmed by options, the player is encouraged and rewarded, especially in the 1999 mode tailored to those with a glutton for punishment, for paring down their specialties and focusing on a style of play. Juxtaposed against the game�s commentary on the medium, we wonder when player choice is really most important?

These are supplemented by the Skyline mechanic, allowing the player to fly across various islands of the city via rail and shooting down enemies from a distance before swooping in at breakneck speeds to twist the neck of their comrades. I found this part to play extremely well in some areas as a way to buy time, but to actually engage in combat from the lines can be difficult. You�ll move quickly, and targeting enemies from these distances can be daunting, especially without explosive weapons forgiving a bit of error.

Pair the offense with a memorable defense. Outside the rabble of police and Vox Populi flying at the character, the game is peppered with enemies that are not simply in Columbia, but are part of it. The Handyman is emblematic of the industrial age Columbia finds itself in and garners sympathy via both voxophones, audio logs scattered about Columbia, and dialog. Motorized Patriots echo the religious worship of Washington, Jefferson and Franklin, expanded by spouting claims of their ability to judge actions as a deity might. The only hiccup may be the Boys of Silence, who lack a backstory. Hopefully we�ll see some expansion in DLC.

Infinite garners every ounce of hype it has received and praise pouring in. We�ve seen many games professed as advancing the medium, but very few of them take advantage of the medium like Infinite does here as opposed to trying to emulate others. Infinite embraces the shortcomings of games, and then turns them into an incredible narrative tool that will be arguably impossible to imitate without being completely derivative. Infinite treads new ground while paying homage to the old. On a personal level, this game exemplifies everything I believe games can and should be to solidify their revolutionary position in story-telling and immersion. If you play one game in your life, let it be this one.
Login to vote this up!