Road Rash: The Novel - A Review

12:28 AM on 03.31.2013 (server time)    0
Back in the early 1990s I was a big Sega fanboy. I was the proud owner of a Sega Megadrive (Genesis for the American readers out there), and as a diehard Sega fan I regularly purchased Sega gaming magazines. One of my favourites was the British magazine Sega Power, http://en.wikipedia.org/wiki/Sega_Power. I actually subscribed to Sega Power for quite a while; such was my love for the magazine.

In an effort to stand out from the glut of gaming publications back then Sega Power began attaching novelizations of key Sega titles to the front of their magazine. These novelizations were written by editors and reviewers who were involved with the magazine, and I imagine that they must have been in some way sanctioned by both the developers and publishers of the games in question.

As well as growing up as a gamer, which is something that my older brother had a big influence on, I was also an avid reader. As you can probably imagine I went completely apeshit over these novelizations. I still have them in my possession, and I have often intended to go back and re-read them to see if they actually are as well written and exciting as I remember them being. Over this long Easter weekend I finally got around to taking Road Rash: The Novel down from my bookshelf to read through again. 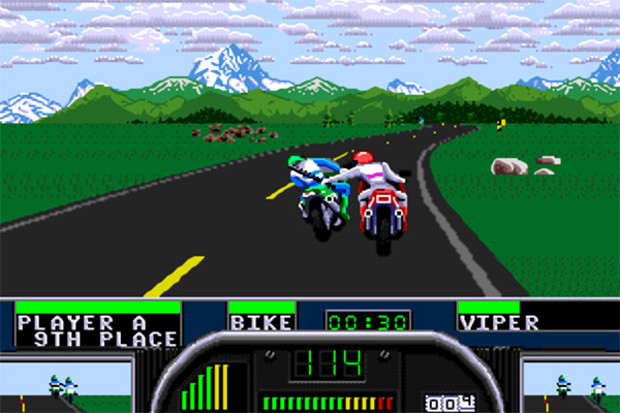 The story then montages its way through the next few months. Player improves in the rankings steadily until he eventually takes 2nd place behind Shiva, a rider from "the land of the rising sun". Hmm, there might be a bit of cultural confusion going on there? With a name like Shiva I would imagine he would come from India. Anyway, during this section of the book the writer kind of lets his reviewer side peek through quite a bit. Player offers some pro-tips to the reader about the best way to take jumps, and also the best way to knock another rider off of their bike (apparently by kicking them off, which I have to agree with from playing the games).

As the story nears its conclusion the organisers of the Road Rash races progressively make the races longer and more dangerous by providing all of the riders with newer faster bikes. At the start of each season, and consequently the start of each new chapter of the book, Player gives the reader a code containing his data from the previous season. All of the racers' results are entered in a fancy race computer, you see. This is a cute conceit, as anybody who has played the game will know that after each race you are given a password to save your progress in the game. I haven't tried these codes yet, but I'm sure that if I boot up my Megadrive emulator on my Wii and plug the codes in then they will correspond to different race seasons in the game.

In the end the story sort of peters out without any sort of real climax. Instead of having one last glorious race against a rival, or something along those lines, Player decides that the races have become too long and too dangerous so he and Natasha (he eventually gathered up the courage to talk to her and they have since become lovers) ride away into the sunset of the Pacific Coast to live their life happily ever after.

Overall, the book actually is enjoyable in a simple, fan fiction type of way. The writing is full of character, although some of the dialogue and Player's internal monologues are kind of cringe inducing. The main problem with the book is that there isn�t really a serious villain of any sort, the only challenge that Player faces are challenges that he presents himself with. Considering that there are 14 other riders it would have been easy for the writer to develop one of them into a rival for Player to compete against. Despite the drawbacks I am definitely happy that I re-read this. At the very least, it has made me hungry to play some Road Rash!

Depending on what type of response I get to this I may review the other books in the series, Super Monaco Grand Prix and Desert Strike. I also have another book from a competing publication, Sega Force, which has novelizations of two games in it: Street Fighter II and Streets of Rage II! As well as this I have a Metal Gear novelization that I bought years ago for shits and giggles and never actually got around to reading. It has the classic cover with the Michael Biehn look-alike holding his non-existent gun.

Thanks for reading! I'd be curious to see if anybody out there remembers this book, or owns other similar books. Those old magazines used to put some interesting stuff on their covers.
Login to vote this up!