6:28 PM on 03.28.2013 (server time)    0
Not from characters in the game, but between a friend and myself. The beginning of this game had me thinking about how we discuss games and Bioshock Infinite especially has some serious conversation to be had. I do want to be upfront though and say that there isn't anything in this article that I would consider to be spoilers as no plot specifics are mentioned and discussion is limited to the events that occur within the first hour, mainly the actual introduction to Columbia and is in line with what little I had seen and heard in trailers or previews prior to release. However if you are a purist and do not want to know anything about the game before going in then this is your warning!

Me: There is already something very curious about this game world.

Me: Whoa fucked up.

Friend: Yeah, I am still taking it all in. So immersing.

Me: It is. Definitely a religious overtone. Just wait till you see what just happened. It’s fucked.

Friend: Hahaha I have heard there is a lot of fucked up social issues present considering the time this is during.

Me: I had too. Didn’t hear specifics. Did not expect it to be this.

I had heard about racism being present in Bioshock Infinite months earlier, but honestly was not prepared for the moment when it hit. There was a prompt on the screen essentially asking for me to react to what I saw and I froze. I sat there for what felt like an eternity grasping with my choices and holding my breath in contemplation. Do I do what I need to do to blend in with the crowd? I have a mission to accomplish after all. Or do I do what I feel and know is the right choice. There is a countdown slowly taking away my chance to react so I make it, pause the game and regain my composure.

As I settled myself I felt the need to talk to someone about it right away. I texted my friend who picked up the game at the same time with me and I could see he was playing the game from my friends list. I knew we had to be around the same point in the game, but the tricky thing is while there are of a lot of good moments in the narrative for commentary on serious issues to be made I am trying to walk on eggshells to not ruin the experience for anyone else, which resulted in the vague fishing conversation above.

From the perspective of mainstream games there have been many other games that have brought about conversations about real issues that people face from Lara Croft’s sexualization, Star Wars: The Old Republic’s attempt at introducing gay characters or Resident Evil 5’s racism. In most instances though the conversation that is brought up here is from an accidental oversight by the developer or because the issue was planned to be a discussion point but handled poorly or taken too lightly. The major difference with how Bioshock Infinite addresses these issues is the world. It isn’t trying to be realistic version of our world or one that we are familiar with, but it is going for a world that is realistic, full of atmosphere and fully fleshed out including it’s social issues. This is what makes it so believable and discussable.

Friend: I’m literally just sitting here listening to “Colombias gayest quartet’ perform God only Knows on a flying blimp. This game is amazing and I’m barely playing it yet.

Me: I was too. You are not that far behind me. The world is great but I feel like a sinner.

Friend: LMFAO I have stolen so much money Ahahaha

Me: Haha not only did I take the food I took the money in the basket on accident!! Fuuccckk. I feel like the ending is going to ream me. 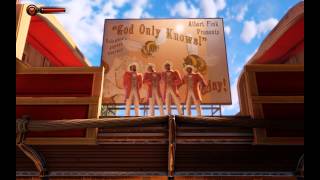 I felt bad about what I was doing at that point in the game. That is another thing that I truly admire about this game even now. I didn’t even have a weapon, nobody was dead by my hand and no where in the game did it imply I was bad, but I felt like a sinner. The word sinner is weird to me and I honestly have never used it once outside of describing this game. I am not a religious person, but this game had that impact on me. This wasn’t like Spec Ops: The Line where you murder hundreds of people, gray areas of right and wrong and your squad mates upfront telling you that you are wrong. This is me in a clean, beautiful world that has it’s own religious and patriotic order. I was applying those rules to myself without any direct reference from the game and coming to those conclusions. It’s truly a testament to the amazingly deep world that Irrational Games built.

Friend: Ok, I’m coming clean here... I took all that money on purpose. That being said, I feel like after what Booker said, that’s what he would have done anyway.

Me: Probably. But does he even know who the fuck he is??

Friend: Booker? I think so!? At least more so than the other bioshock main characters.

Me: Yeah but the intro quote?

Friend: Maybe so. He seems to know who he is though. Somebody in debt with the wrong men.

Me: But you only know that because you read it.

One of the most promising things I see coming out of the next generation conosles is how it could revolutionize the way we talk about games. Even in the text messages with my friend I had to be careful about what I texted to him. I couldn’t ruin that moment for him. But with the different ways that people play games the good commentary that could evolve from a game like Bioshock Infinite could take weeks of waiting or finding a like minded group of people from the internet. Social media features of the new systems likely can evolve these conversations and New Super Mario Bros U is a prime example of this. While it is not a platform to discuss any serious issues (unless you want to tackle the fact that every time he breaks a block he is killing a denizen of the Mushroom Kingdom) it really breaks ground in what could be a revolutionary aspect of how we socialize in games. It’s built in functionality to let players leave each other messages at the end of completing an area is ground breaking.

Imagine if this feature was integrated into a game like Bioshock Infinite. If I am playing and get to that insane moment that I need to talk about I could press a button, open up a text bubble and type in a message. My friends who are behind me could see that message when they reach that point or friends who are ahead of me could go back and view messages regarding events that they have already seen. The conversation could take place immediately when it is most relevant to what is happening in the narrative of the game.

Though we don’t have that level of social integration built into our games yet I hope that everyone takes the time with Bioshock Infinite to discuss all of the intricate detail that has gone into building that world, Columbia, its denizens and definitely it’s real world problems. From nearly the beginning of the video game industry’s inception there has been discussion over maturity in games and whether or not they can be considered art. I can tell you two things assuredly. Bioshock Infinite is absolutely art from top to bottom and pixel to polygon. Second, it is truly a game that is mature, but not solely because of violent material, but because of the adult issues that it so skillfully addresses.

As for me the next day when I saw my friend we had a chance to elaborate on the text messages from that night and have a serious discussion about the issues that were at hand in Bioshock Infinite. That is what is important.

...Back to playing Bioshock Infinite...
Login to vote this up!