Skyward Sword and the complex feelings it evokes 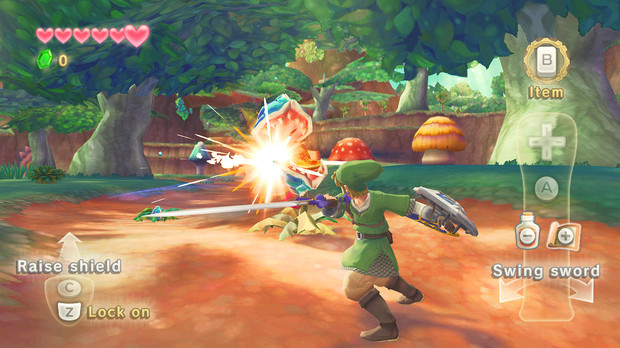 So, I'm late to the party on Skyward Sword. I traded my Wii in shortly after the release of Warioland: Shake it! due to the lack of interest I had in any upcoming games. I recently purchased a Wii U for a nice price and wanted to go back and check out Skyward Sword.

I believe that Nintendo has a series for everyone. For my wife, it's Fire Emblem. For me, it's The Legend of Zelda. With every new Nintendo system I buy, I'm thinking about the next iteration. The most recent title I've played in the series is Twilight Princess and it's tied with A Link to the Past for my favorite game in the series. As stated in my blog about it, I quit the Wii version of the game out of frustration; I loved the GameCube version.

So, how do I feel about the first purely motion controlled Zelda game? It's a harder question to answer than you'd think.

On the one hand, I find the level design, at least in the first dungeon, to be exquisite (Note: I just finished it). Solutions to the puzzles are not that obvious and are sometimes perplexing until the player stumbles across a hint or the actual solution. I love that about this game; it just feels like an authentic exploration scenario. And, honestly, this is the second-best looking Zelda ever. It doesn't quite beat Wind Waker but it has its own beauty and really proves that art design can overcome the hyper-detailed approach of HD graphics. I really respect that.

With all of that said, this game's controls infuriate me to no end. I'm about 5 hours in and the combat is starting to feel better. That's a serious problem. In Twilight Princess, combat felt amazing right away and, in a game with as much combat as Zelda, it should fell great right away. The other constant source of frustration is using the Wiimote to control flight of the Loftwing and the Beetle. It feels a bit more natural to control the Loftwing via Wiimote as it is a large animal, but the Beetle really shows off the lack of accuracy of this control scheme. The Beetle is a small item and should not corner like a school bus and, when that happens, I cannot help but wonder why I'm not using the analog stick on the nunchuk. My thumb is resting on the stick and ready to go.

What does this mean for motion controls
Does combat feel more realistic? It does but it's also more meticulous and less enjoyable. This control scheme also drives home the point that motion controls are less precise than traditional controls and come with their own set of problems for the player to overcome. They're not better; just different.

The way I see it, Skyward Sword is both the best and worst argument for motion control that Nintendo's ever made.

That said, I'm interested enough in the game that I'll continue the adventure. Maybe, at some point, something will click and I'll love this game as much as I love the other games in the series. Here's hoping that happens sooner than later.
#ShareonCommunityBlogs
Login to vote this up!