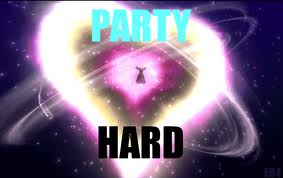 The views of a pleasently psychotic mind


Allons-y! We have been graced with another trailer for RWBY and I'm here to talk about it.

This time we get a character name of Blake and her male companion um.... whathisface, I'm sure they said it but the audio wasn't easy to hear when they did if I'm thinking at the right spot, who now get to talk with voice acting........


Bad anime dub quality voice acting. Not to say it is awful but the whole thing really seems like it was phoned in and doesn't match the predigree that the show is to be born from. The lip syncing also seemed a bit off. Though maybe this was a quick fix and it will be improved in the actual show.

Story wise what happens is the two attack a train, for some reason, fight some robots, for some reason, and then Blake is for some reason sorry and detachs the train car Whathisface is on, for some reason, which as you can tell I have no idea why. Of course all the other trailers gave you no context but in this one it feels like there is supposed to be an this isn't a concept trailer. I don't know it is another thing we'll find out when the time comes.

Now something I noticed when looking at the lyrics during the first trailer. It says "Black the beast descends from shadows...." which implies Beauty and the Beast but nothing in this trailer, besides Blake's anime cat girl ears head thing, seems to connect to that. I mean I thought Whathisface might have been Beast but he never transforms into anything and spends the whole time as a human.

Also noticing the continuation of other colors popping up this time with enviroment. In "Red" trailer the battlefield was on white snow, the walls in "White" were black, and now "Black" has red/black mechs along with red leafed trees. I still like the incorperation of colors but I'm wondering where all the yellow is to represent the fourth character. Unless yellow is different in a now unknown manner.

Action wise this one doesn't really stand out as much as its sisters an I was left underwhelmed.

Overall "Black" has proved the weakest trailer so far but I have high hopes for "Yellow" and for the show it self.

Until the next trailer.

Ah yes the about you section were one must describe themselves in a short but somehow soul revealing manner. Yeah instead I think I'll just give you readers some music to enjoy.