A Kind of Review of That New Tomb Raider

7:02 PM on 03.10.2013 (server time)    0
“A survivor is born”. That is what it says on the back of Tomb Raider’s box; they also present that text quite prominently at the end of the game before the credits roll, and after finishing the game it’s important to keep those words in mind when you play Tomb Raider ’13… yes, I’m making the same distinction here as people do to Sonic the Hedgehog ’06 and Prince of Persia ’08. Fortunately, Tomb Raider ’13 won’t have the same reputation as those two reboots. 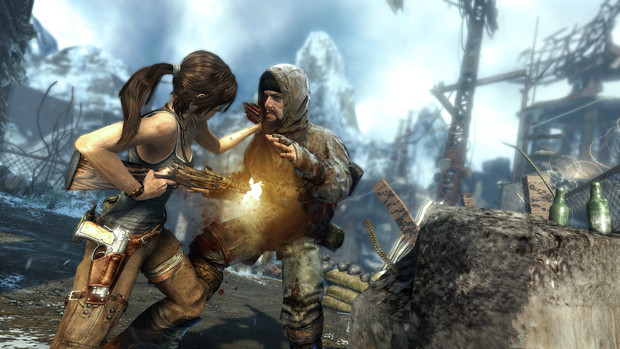 The only problem with Tomb Raider ’13 is that it is very much a game of 2013. As well as the tacked on multiplayer, you will - by the end of the game - have started to unlock new stealth kill abilities which undermine the tone of Tomb Raider ’13. What started out as a tale of understandable desperation soon turns into gleeful murder. You fight your way through armed men by throwing dirt in their eyes, anxious shoves off cliffs and desperately picking up a rock and swinging for the bastards; but by the end you are sticking your climbing axe into the top of a guys skulls and unloading half a machine gun magazine into a downed enemy. It doesn't fit and comes across as a product of being a game released in 2013 for 2013’s gamers. It’s only there to look bad-ass in trailers and not to create a unified game where everything fits. I hope they have the confidence to move away from that with the inevitable sequel.

But overall the game is a success in many ways. Lara Croft is now a character with some depth and a strong personality. When bloggers do lists of good female protagonists we will certainly see this new Lara Croft amongst the likes of Jade from Beyond Good & Evil and April Ryan from The Longest Journey, which is a great thing we can take away from Tomb Raider ’13. “A survivor is born” and long may she continue to survive as this new Tomb Raider has the potential to be one of the finest in its genre again.
Login to vote this up!