The Misfortune of the Misdirected Violence Debate

Is there any medium in existence which features more characters setting out to save the world, or their friends, or their family, or loved ones than video games? Among protagonists, perhaps no medium has a higher percentage of characters that are trying to right wrongs or save the day. In many cases, these heroes are completely one dimensional in their single minded pursuit of their heroic goals, simply to fill the need of an objective in a game. It is striking that entertainment filled with so many heroes out to defeat the villains and right the wrongs of the world, can be so quickly blamed for the worst behaviors of human beings. There are two points to discussing this topic that the media and outside sources completely avoid, for fear of sabotaging their own propaganda fueled ratings.

First, competitive multiplayer should be set aside and recognized for what it is; competition. Anything that pits human beings against one another plays to long held survival instincts and it is the very nature of human beings to try their utmost to win any competitive endeavor. Regardless of what is displayed onscreen, there is no parallel beyond the thrill and aggression that come with competition. The pursuit of being the best is what drives many of the aggressive responses that we see in competitive gaming. Like any other sport, it is the thrill of competition that drives aggression and crude behavior. Changing the setting does not make the competition any less of one. Competitive reality television makes this perfectly clear. Imaginary pixel warfare is no different from any other sport in this regard. Ask anyone that�s played Mario Party and they will tell you that the nature of content onscreen is irrelevant if it drives you to compete for the thrill of victory over others. Any number of well designed competitive games spark this pursuit of victory, and for many franchises building this world of competitive play is the sole objective. The content is irrelevant if it effectively drives you to win, it is as simple as that. Video games as a hobby should not be penalized for encouraging competition, nor seen as any more a source of aggression than when fans of rival sports teams brutally injure one another. There is no difference, aside from a lack of interactivity.

The second point that mainstream media and opponents of video games always neglect to mention is that the overwhelming majority of video games feature characters that are agents of good. Gaming�s most recognizable icon, Super Mario, has been out to rescue damsels in distress so many times that it has become something of a joke within the series itself. Every Final Fantasy title has pit a group of ragtag heroes against an evil being/god/nihilist/force of destruction and tasks the player with fixing a world beset by evil forces. Even the most decried violent shooters like Doom, Wolfenstein, Quake, Half Life, Call of Duty, Halo and many others feature a protagonist who is trying to defeat evil and nefarious forces, be they the demons of hell, ruthless terrorists or an evil invading force of aliens. A great majority of the supposedly ultra-violent games focus on defeating the most stereotypical of evils. While there are titles available that do not automatically set a player on a predefined path of morality, few of these titles encourage or demand reprehensible behavior and instead leave morality as an open choice. These games leave the choices up to a player to determine their own behavior and morality, and such a thing can hardly be seen as anything more than a choice. The ability to choose is something that only video games have been able to convincingly offer, and even this mechanism is still in an infantile stage. Most choices that have been offered have been comedic in how polar they are and hard to take seriously on any level. It is only with recent titles such as Telltale�s The Walking Dead, that choice is starting to see signs of real maturity as a mechanism in games. The ability to choose between good and bad behavior in a fictional medium is still a very new idea in the grand scheme of media, interactivity itself not being much older. Choice is the ability to co-write an interactive experience, not an endorsement of any particular behavior. 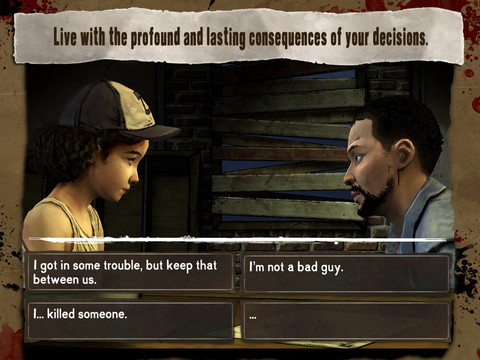 If we are going to be honest about recognizing the overwhelming number of heroes that exist in video games, then we have to recognize the outliers as well. There are titles available that do encourage negative behavior like any medium. Purposefully disturbing novels, radio broadcasts, movies, and television have all been created by someone seeking to incite a response or for darker personal reasons. Video games are not alone in having obscure elements that tarnish the rest of the medium as a whole. There will always be reprehensible elements in anything that allows for personal expression. These negative creations will always exist, and we must simply ignore them and let obscurity do its work. Video games have outliers that have either set out with the purpose of being controversial by definition or are trying to provide an experience that did not previously exist. Grand Theft Auto exists in the same culture that the Godfather once did, and both glorify a lawless lifestyle, but their existence is nothing more than culture exploring itself and seeing what stories are available to be told. Yes, there exists the ability to use GTA games as mayhem simulators and to commit nefarious behavior, but if the ability to go crazy with a simulation was a door to the downfall of society, I think many more sprees of destruction would have come from The Sims than Grand Theft Auto.

With these negative elements explained and set aside, I am still dismayed every time that I see video games decried by pundits and news outlets who, true to form, can only ever focus on the negative side of any issue or any impact anything has on society. Through the power of ignorance, suddenly the hobby that I and so many hold dear is instantly the pastime of the deranged. The multitudes of heroes that decided to take a stand and make a difference are lost to political aspirations and ignorance. All the experiences and discussions of characters throughout the Metal Gear series are lost because the main characters can wield a gun if they choose. Metal Gear is a series that dares to dabble in serious discussions on violence, warfare, nuclear proliferation, international politics and endorses pacifism to the degree of making it possible to complete over half the installments without killing a single enemy. We never hear these traits discussed when video games come up in debate, no politician or new media outlet has ever acknowledged Metal Gear�s ability to broaden the horizons of a player or initiate discussions on its subject matter. No politician has ever championed the messages of friendship, camaraderie, and self acceptance found in the brilliant Persona series of RPGs that dare to explore modern issues of identity, sexuality, and death. No source outside our culture has ever explored the ability of Final Fantasy VI to initiate internal musings on heroic values and how to rebound from loss, despair and failure. Outside of gaming websites and journalism, no one had the time to spare for Spec Ops: The Line, a game which raises questions about the very nature of surreal violence, the culture of war and what those subjects represent for video games. The term outsider is a divisive one, but a term that becomes ever more appropriate for those who comment on video games from a spectator seat. Those who decry video games and wish to saddle them with the blame of horrible human beings are more than happy to stand in judgment while only ever remaining on the outside looking in. They would never dare to try and understand that which they demonize and fear.

We as gamers must continue to strive to show our hobby for what we know it truly is, while endeavoring to stay strong in representing our pastime. The debate over violence in video games is one that seems to go on without an end and is undoubtedly tiring, but we have to continue to make ourselves heard. We must use the abundance of positive examples to exemplify why our hobby is not only without blame and entitled to creative freedoms, but why video games are simply a beneficial and fantastic part of our culture. We have to talk loud and proud about subjects like Portal�s brilliant pacifistic, empowering approach to first person games. We have to talk about the power of interactivity, and how player input took the video game version of The Walking Dead to emotional places that the neither comics nor TV show will ever manage to reach. There should be discussions on the prolific number of positive roles that games cast players in, and how many encourage noble, heroic values. We should be encouraging others to experience the stories of heroes defying fate in Chrono Trigger, to revisit the wonder of childhood and purity of emotion through Earthbound, and to enjoy the hilarity of Monkey Island. We have to look past the pandering attempts to appeal to baser instincts, past the appeals to controversy, and past the just plain poorly made, and show others the best of what video games have to offer. There are countless examples of not only the great things that games contain, but the epiphanies they can spark within us, and the stories of how they entertained us, helped us grow, or brought needed relief when the world was crashing down upon us.

We need to start sharing these stories and meaningful moments. Those who play video games and those who love our hobby need to bring the outsiders in, to talk with them and show them who we are. We need to help those who decry video games understand the best traits of the medium. We need to refute what they are trying to vilify and make clear the folly of it.

We need to show them why we play.
Login to vote this up!

I'm a former 1up.com blogger and have moved over here since the site was declared legally deceased. I've always enjoyed the reviews and features Destructoid has offered so I've moved my blog over here. I write about various topics, both personal and topical and how videogames relate. Hope you enjoy. I also tweet bitter and cynical musings.