Well, colour me a little surprised. Just before I was ready to complete my Japanese copy of Project X zone, it was announced that the game would get a western release! Well, the game was my primary reason to get a cool-as-hell JP 3DS but not the only reason. That would just be silly! I do have a number of other JP only games which I wanted to try out and the next game is a bit of an oldie now... Senran Kagura Burst! 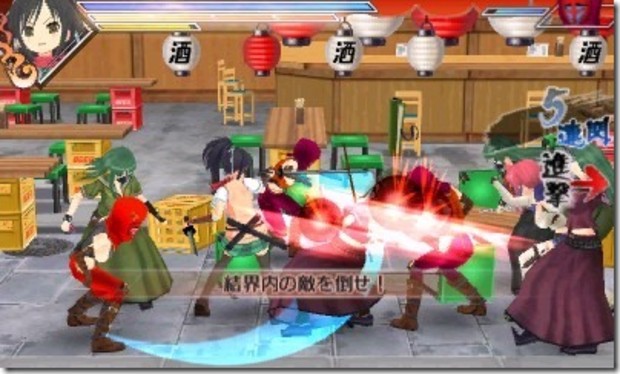 The battle system in the game is incredibly simple and somewhat reminds me of Muramasa on the Wii, but without the gorgeous hand drawn graphics. There is also a high emphasis on fanservice in this game, with the ability to customise your characters looks and costumes in the game with additional costumes unlocked as you progress. And you can't really escape from the clothing damage sequences either...

So, how does it fare?

� simple yet effective - the combo system in the game is a little too basic but you still feel like a bit of a badass when you're kicking the butt off huge groups of enemies.
� 2 games for 1 - as stated above, Burst has the characters and missions from the first game, so essentially, you get 2 games for the price of 1.
� Damn challenging - despite the simplicity of the systems, don't be fooled. Some of the missions in this game are balls hard!! Completing them all will take some time and unlocking the 2 secret characters will prove to be exceptionally difficult as well!
� Varied characters - Despite the characters having incredibly similar combos (at least initially and especially in the air), each one feels sufficiently different enough to require tweaking your tactics when you play as them. Ikaruga has long range and wide attacks so can handle large crowds well, but isn't so effective on 1v1 situations and is slower too. Katsuragi is really fast and can do hit and run attacks but it can be hard to launch opponents or get her to stop where you want her to since her attacks push her forward for example.

� Hebi Joshi Gakuen - I guess the makers thought that, by adding a story to the "villains" from the first game, it may help make them appear more human, but instead, it just made them more insufferable! Mirai and Haruka in particular are annoying as hell and none of the characters are as fun to play as the girls from Hanzo Gakuen.
� Too much service - It was made around the whole concept of fanservice in 3D but sometimes, it just gets in the way. There's just too much of it at times!
� Infinite combos against you! - In later stages, enemies come at you in larger numbers but some also gain projectile attacks, which are hard to see! To make things worse, there's no blocking in this game so it's very easy to find yourself being juggled from continuous projectile shots with no recourse for a counterattack. You just have to soak up the damage, which is a very frustrating occurrence and happens a little too often for comfort.
� The jump button - Aside from allowing you to perform an aerial ninpo, which you learn later in the game, there is absolutely no use for the damn thing!!

Senran Kagura (and Burst) are a little tragic in a way. The underlying game is playable and somewhat fun but not particularly memorable nor deep. It needed a hook to get people into it. Muramasa had a deceptive system which rewarded calm, measured play and also had amazing animated sprites to look at. Senran Kagura basically went full fanservice and that is what most people will see. Underneath is a serviceable game which people will enjoy but nothing to scream about. Not that anyone would hear you anyway over the noise regarding the stupid levels of boobies in the game. The Vita game, Shiovi Versus looks to continue the trend as well, swapping out the 2D movement for something akin to Dynasty Warriors, but with the basic combat systems in place.

The Senran Kagura series is basically like Dead or Alive. Those looking for something to mock will just go on and on about the clothes stripping and the boobies but if you play it, it's not half bad!
And yes, I'm likely to be getting shinovi Versus as well. Maybe I'll do a mini review of that too.
#ShareonCommunityBlogs
Login to vote this up!