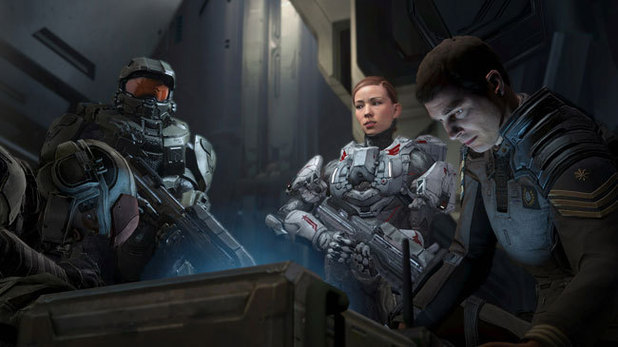 I just beat Halo 4. I’m a little late to the party as usual, and before jumping into the campaign I decided to rummage around in the dark crevices of my brain and internally swot up on whatever Halo knowledge was lurking in the shadows. Confident with the modest amount of knowledge I had acquired over the years, I was all ready to jump back into the boots of the Chief and start spreading goodwill to those pesky Covenant rascals.

If you asked me to summarise Halo 4’s plot, I wouldn’t be able to. I might be able to string together a mess of sentences that roughly sound like this: “There was a guy… he did a thing… there were a lot of floating things… he made speech… everything was okay?” None of this is information is substantial enough to convey any actual plot points from Halo 4; a confusing mess of vague descriptive language. What’s more confusing is how Halo 4 seems to approach storytelling in a similar way to my ramblings a few sentences previous. 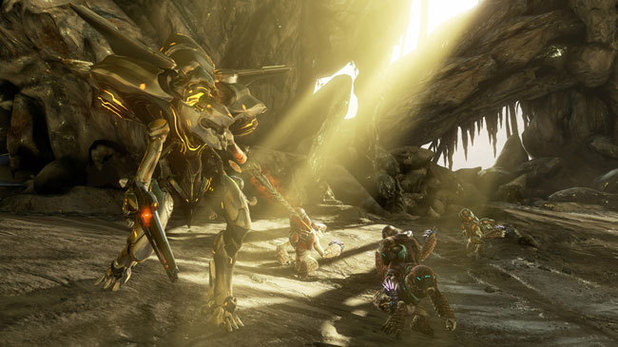 Don’t get me wrong, Halo 4 is a great game. Gameplay-wise, I found the experience nearly faultless; a mechanically sound experience blended with rich, gorgeous environments and stellar sound design. In the realms of multiplayer, too, 343 have established that they know how to pull off the grand multiplayer experience that is now so integral to the Halo experience. But when it comes to narrative, Halo 4 is plagued with the same problems that previous iterations of the series were, creating an overall experience that both confused and bored me.

Before the “n00b” fingers start a-flying, I must clarify that I am no Halo expert, but I do consider myself relatively well versed in most of the series’ surface level lore. I’ve played every main series Halo game, plus Reach and Wars, and I’ve dabbled with a few comics here and there.

One of Halo 4’s biggest failings campaign-wise was in the reckless abandon with which it approached exposition. Instead of seamlessly easing new players into the experience and refreshing returning Halo fans, the campaign bombards us with throw-away references to Forerunners (a part of the series that has barely been touched upon previously, and one that was completely alien to me), a romantic relationship between Master Chief and Cortana that seems to have sprouted from nowhere, and a ton of vague dialogue to fill in any blanks that might have popped up. After asking a more Halo-savvy friend of mine about the Forerunners, he replied: “That sort of thing gets mentioned in the books a lot. You have to read those to really get that stuff”. Hardly a strong foundation upon which to build a new trilogy is it?

Most of the story tends to be conveyed by characters, specifically through expositive dialogue and “information dumping”. All too often did Cortana simply tell the Chief what was happening, neatly avoiding any attempts to convey narrative in a more natural, organic way. This is doubly true of The Didact (who up until about half way through the game I thought was a ship or an abstract entity), who regularly announces his plans of a galactic revolution against humans to the Master Chief, acting as a galactic town crier to the Chief’s space-village idiot. Harbinge- the Didact’s vague “villain-speak” represents one of the most deplorably lazy techniques in writing.

See, I wouldn’t mind such an obvious attempt at “information dumping” if it actually helped me to understand the game’s story, but when Cortana talks in sentences heavily laden with “Infinity”, “Reclaimer”, “Didact”, “Forerunner”, “Promethean” etc, the jargon becomes hard to swallow, even for someone relatively familiar with the Halo mythos. I cannot begin to imagine how hard it is for newcomers to the series to stomach this kind of babble. As Master Chief regularly asks: “What’s happening?” or “What is that?” I have to laugh at the ironic nature of the situation, and wonder if maybe Master Chief is the relatable surrogate protagonist he is often touted as.

As well as being lazily written and confusing, Halo 4’s story also fails to reach any high points in terms of emotional depth or characterization. The relationship between Master Chief and Cortana felt forced, and since the Chief has the emotional capacity of a biscuit tin, he struggled to make me feel at all empathetic towards his situation or the impending loss of his favourite AI.

Secondary characters are also introduced in a haphazard manner, most notably Laskey, del Rio and Palmer, none of whom are given much screen time; at least not enough for me to really grasp who they are besides the caricatures I made up in my head: “Laskey Come-Home”, “Captain Dick” and “Sgt Calhoun”.

Halo: Reach, by comparison, managed to have some kind of emotional punch by telling the relatively personal story of a close-knit group of soldiers. Each soldier was given ample screen time to convey who they were (usually an entire mission per squad member), and the emotional bonds formed between Six and his team become stronger as more Spartans fall in battle. Sure, the characters may not have possessed much in the way of variety, but they were more varied than: “Faceless man who is quiet”.

I feel like I’m being unfairly critical of Halo 4. After all, Halo campaigns have always been simple, one dimensional excuses for more alien blasting, and tend to be an inoffensive distraction from the arguably more popular multiplayer portions of the series. But something just didn’t sit right with me about Halo 4’s campaign. To me, it feels like attempting to tackle a more inventive, grandiose plot this time around has backfired on 343; the story buckles under the weight of its own aspirations.

It pains me to say that I’d rather Halo 5 returned to a safer, more mundane Covenent invasion storyline, but it is rather telling that I learnt more about Halo 4’s story from the game’s Wikipedia article in preparation for this piece, than from the actual game.
#ShareonCommunityBlogs
Login to vote this up!