XCOM: Enemy Unknown and breaking into a new genre

10:29 PM on 02.25.2013 (server time)    0
As a teen, I watched both American Beauty and Super Troopers in the same night. I loved Super Troopers and I hated American Beauty. Everyone in the room hated it. Years later, several of my friends that were around that night have rewatched it and claim it to be fantastic - a result of matured taste I suppose.

Similarly, my first experience with turn-based strategy games, not including a slew of Pokemon titles, was back on the Gamecube with "Future Tactics: The Uprising". It doesn't help that this was already a pretty subpar game, but it certainly turned me off of the genre. But years later, here comes XCOM and its universal acclaim, begging me to sit down and have a taste.

And it tastes good.

XCOM: Enemy Unknown casts the player as commander of XCOM, a military project spearheaded by a council of the world's most powerful nations fighting off alien invaders.

The player�s primary job is to direct troops in combat. Each mission begins under a fog of war, and the player must lead their troops across the field, find the enemy and eliminate them.

Troops come in a variety of classes with many weapons in tow. Kills on the field result in promotions in the barracks as troops earn perks depending on their class. Devastating perks at higher ranks are paramount to keeping any individual soldier alive on the field and make it hard to level up young squaddies without late-game armor and weapons at their disposal. 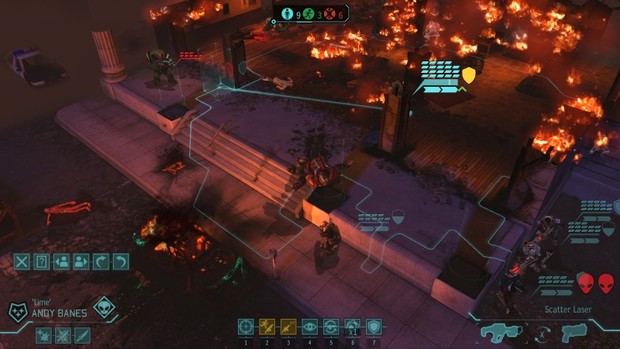 Occasionally, indicators will signal a troop has view of an opponent when none are actually in view. Additionally, shots will sometimes fire through objects in the environment and hit the opponent. The maps that crop up are varied enough in size and environment, but aren't necessarily representative of the locale in which the mission is supposed to take place. English storefronts can be found in Beijing, and forest-surrounded streams aren't uncommon in Egypt.

These, of course, are merely aesthetic gripes. On a more substantial level, troops are subject to panic when mind-controlled enemies are killed, since they are "allies" at the time of death. This seems silly. Panic will also sometimes result in troops literally doing an about face and shooting an ally behind them, which also seems outrageous. There's also tell of a teleport bug spawning enemies behind your line of troops - a bug that will decimate any Ironman run.

It would also be nice to have an idea of what the field of view will look like in a new position before actually moving a troop. Often a position seems to offer a better vantage point, when it actually prevents view of the enemy entirely.

These mild issues aside, XCOM is a beast of a game perfect for anyone who enjoys a challenge. Even for people who object to a slower-paced game, XCOM is high-tension enough to keep you on your toes anyway. This is a must buy for anyone and everyone, and it can't be stressed enough.

Guess I should go back and rewatch American Beauty...

Bottom Line: 9.5/10
#ShareonCommunityBlogs
Login to vote this up!