Why King K. Rool is perfect for the next Smash Bros.

11:01 AM on 02.22.2013 (server time)    0
When Super Smash Bros. Brawl came around, I was satisfied knowing that all of the big time video game characters came around, including Snake and Sonic. With the next Smash Bros. already in development, I feel it's time for me to talk about the one character that I always wanted to see make a return and be fully playable. That character my friend is none other than the mentally unstable King K. Rool. 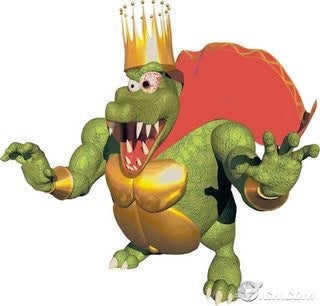 What I find likeable about him is just how insane in the head the guy is. He really aims high to steal DK's Banana Hoard for...whatever reason it may be, that's how crazy he is, what would he do with bananas? I think he should join the next Smash Bros. Because he clearly deserves it, in fact he may even bring a few �Friends� over to help him. Come and join me as I explain his interesting move set.

The first thing I need to go over before I explain the rest of his move set is his down special move, it's what makes K. Rool a very unique opponent. When done K. Rool will transform into 3 different personas. First you have good old regular King K. Rool, he then changes into his pirate alter ego, Kaptain K. Rool, transform again and he becomes a mad scientist, Baron K. Roolenstein. Transforming again would loop the cycle back to his King form. In the midst of the process of transforming, he changes costumes to go along with his personality. In a sense, he acts a lot like Pokemon Trainer, except instead of 3 people, he thinks he is all 3 different people.

I thought it would be unique for a fighting game to feature a character with multiple personality disorder, which is why he being in Smash Bros. would be special. What set the 3 personalities apart are their different fighting styles and stats. King K. Rool is a heavy based character and is a powerhouse with excellent smash attacks, but at the cost of his speed and recovery. Kaptain K. Rool is best known for his long range attacks and is the fastest of the 3. Finally Baron K. Roolenstein fights much differently from his other 2 personalities and requires more technique, he also has the best recovery.

Now to go over the Special moves list which is now split into 3 lists. A lot of the moves come from the Donkey Kong Country games so you might have to use your imagination.

First up, King K. Rool:
Special move: Crown boomerang � K. Rool tosses his crown like a boomerang (if the special button is held down, it will result in a faster throw, with more distance covered).
Side Special move: Ramming attack � He will run at full speed running a person over.
Up Special Move: Cape glide � K. Rool jumps up with magnificent force and carefully glides over a distance, it can cause damage.
Down Special Move: Costume change � King K. Rool changes into Kaptain K. Rool.

Kaptain K. Rool:
Special move: (Spiked) Cannon shot � K. Rool uses his gun to shoot a cannon ball, once shot it will momentarily land on the ground to be used as an item. If you hold the button in and release, he will shoot a spiked cannon ball, however if you wait too long on holding the button in, the gun will explode on you and cause damage.
Side Special move: Blunderbuss twirl � K. Rool will twirl his gun to reflect any projectile weapon.
Up Special move: Rocket blunderbuss � K. Rool uses his gun to propel him up for recovery like a rocket, it can cause damage.
Grab Special move: Vacuum blunderbuss � Unique to Kaptain K. Rool, he can use the guns vacuum suction to pull his enemies close (tap the grab button to grab and hold in the grab button to use the vacuum).
Down Special move: Costume change � Kaptain K. Rool changes into Baron K. Roolenstein.

Baron K. Roolenstein:
Special move: Beaker toss and Laser gun � Pressing the button causes Baron to toss lab beakers that can burn opponents. Holding down the button can make Baron shoot a laser at his opponents, the gun is short range but it can momentarily stun an opponent.
Side Special move: Barrel throw � Baron will throw 3 types of barrels, a wooden barrel that is breakable and can sometimes contain an item, a steel barrel that is reusable when stopped, and the rare TNT barrel that can cause explosive major damage.
Up Special move: Backpack copter � Baron's greatest advantage is his incredible recovery with smooth flight controls and he can fly in any direction, he can also attack while flying. Baron's backpack copter only lasts a few seconds though.

One thing to note is if K. Rool were to consistently switch between forms, he will become very exhausted, which will cause his attack power and resistance to drop. So you have to plan carefully. Much like Pokemon Trainer, You can choose what form of K. Rool you can start with before the match starts.

Of course like all the other Smash contestants, they are all given powerful Final Smashes to unleash upon all who opposes him/her. I figured since we are dealing with King K. Rool, we can introduce his most powerful 4th Persona, his heavyweight boxer champion personality, King Krusha K. Rool from Donkey Kong 64!

Once he has changed into his boxing getup. King Krusha K. Rool is ready to lay the smack down on all who stand in his way. He is really fast, completely invincible, and has an assortment of new boxing moves so he can pummel his opponent to a bloody pulp. His Special move set goes just like this:

King Krusha K. Rool:
Special move: Wind up punch � K. Rool quickly charges up a deadly punch far stronger than DK's Wind up punch..
Side Special move: Boxing glove boomerang- it's pretty much a beefed up version of the crown boomerang.
Up Special move: Charge jump � K. Rool will spring up with magnificent force and whoever is caught in the jump will receive major damage, the longer the button is held, the more jump distance and power K. Rool will build.
Down Special: Earthquake ground pound � K. Rool will jump up and land down with force as he causes shockwaves to travel across the ground, the shockwaves can cause damage and perform a tiny stun. Feels good to have a Down Special move be an attack now, doesn't it?

Once his Final Smash form is done, K. Rool will revert back to whatever form you were before he changed.

And that was my take on K. Rool being a very interesting Smash Bros. character. If he were to make it through, (which I get the sad feeling he won't considering Nintendo's hate for K. Rool and the Kremlings) only good would come from it, like maybe enough star power for him to be in the next Donkey Kong Country game or just the very fact that we expanded the Nintendo Villains roster, and well...I made it this far I might as well go all the way so cut me a break:

Taunts:
All 3 forms of K. Rool will fake their deaths.
K. Rool's Boxer Persona will wave to the crowd.

Well, I hope you enjoyed reading this, what do you think? Do you think K. Rool should be in the next Smash? Someone else? Do you like my move set or do you say otherwise? Discuss away!
Login to vote this up!