For as long as I can remember I've been a gamer. Playing videogames has brought me some of the most vivid experiences of my life and I can't imagine what life would be like without the unbridled joys gaming has to offer. That being said, I'm not a typical gamer. Despite being alive during the medium's golden years there are many popular games and genres that were big when I was young but I somehow managed to miss out on and breaking out of my comfort zone can be a tall order because, well, I've never been particularly good at playing videogames. You heard correct, I'm just not that good. Oh sure, I've played a large number of titles during my gaming career, many of them difficult and even finished most of them too but I've always lacked a certain natural ability for play that I know others around me have. I've been playing games long enough that I can instantly wrap my head around a controller and a game's basic mechanics but completing any title always requires a lot of persistence and an easy mode. This series will highlight major games and franchises in the industry from an Outsider's Perspective that I've only recently delved deeply into. The Street Fighter series is most famous for popularizing the one-on-one fighting game genre. The second entry in the series was so popular in fact that (with the help of it's rival Mortal Kombat) it spawned an immense quantity of lackluster imitators throughout the 90s. The game's feature a large cast of characters representing a wide variety of fighting styles and backgrounds. Each title in the series tasks the player with defeating every other fighter in a tournament until ultimately facing off against an overtly powerful opponent in a final face-off.

Street Fighter features fast and fluid fighting gameplay with a surprisingly intuitive control scheme. I was delightfully surprised with how simple it was to control my fighter's basic actions even during the heat of combat. Blocking, jumping and executing attacks feels very responsive and immediate. I even found that performing special attacks was much simpler than I would have thought. Instead of inputting cryptic command codes special attacks are implemented using fluid joystick motions and corresponding button presses. For the most part specials can be discovered by observing the opposition and experimenting a little. Practicing with multiple fighters turned out to be a lot more fun than expected and I quickly had a personal collection of favourite characters I'd use in multiplayer matches.

The series definitely boasts a uniquely animated style. Characters come to life with a diverse looking plethora of movements, reactions and attacks. It's easy to take note of an impressive level of attention to detail in everything in the games' environments. The soundtracks are also worth mentioning because the music really accommodates the action on-screen with a memorable selection of great tracks. Perhaps, because I had no history with the series, I was strangely drawn to Street Fighter III. It's easily the most difficult in the series and I never managed to defeat Gil, but it's also the fastest one I played in the series and I found the parry system to be very rewarding. The strange cast of characters would no doubt be oft-putting to longtime fans but I enjoyed the roster of new faces and learning the basics all over again. Street Fighter III was easily the most technical in the series but investing time in the title gave me a greater sense of accomplishment. 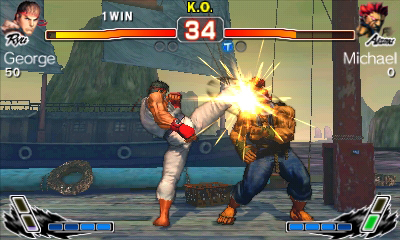 Street Fighter offers a great multiplayer experience locally. Two players with equal experience can easily pick-up-&-play any title in the series and have a good time. I also played a great deal of online matches in II, III and IV. I was surprised that with a little bit of experience the games' match-making services were well equipped to pit players against others with comparable ability. My biggest fear when I decided to get into the Street Fighter series was that it would be near impossible for a beginner to learn the ropes but instead Street Fighter lends itself as the epitome of the arcade experience. Every game is easy to play but difficult to master and it has a perfectly calibrated difficulty curve to accommodate it.

When I was young I asked my father for a copy of Street Fighter II for my birthday. Instead I received a copy of Streets of Rage 2. I was initially disappointed until I played the game and had a blast but my father's mix-up had the unfortunate effect of me missing out on the fighting game boom of the 90s. After playing the Street Fighter series I'm glad I convinced myself to take this plunge because these games have quickly become favourites of mine.

This overview was completed after having played the following titles: