The main difference here is that I wasn't a game designer when I first came to Dtoid. It was '08 I think, I was just learning how games work. I wasn't a very active member of the community, and eventually I strayed away entirely. I've been living in New Jersey, working a day job and learning about game design. I went to community college for a couple years and learned a lot on the subject, but decided to work on projects on my own, reading up on the theory and execution of design.

Flash forward to now: I'm developing a stealth-strategy board game, Decoys, for my portfolio, and I need to do some blind testing.

That's where YOU come in.

I need people to play my game. I need to make sure my rule-set makes sense and people can actually play the game without me being there to answer questions. For anyone who's interested, I included the rules at the end of this post.

If you do play, I just ask that you try your hardest to remember as much as you can about your experience so you can tell me about it! I'm looking for as much feedback as I can get, any and all is greatly appreciated.

Anyway, I just wanted to give everyone a heads up about me before I started asking for playtesters. Thanks for reading, and taking whatever time you do to read and/or play my game!

What you need: 6 unique game pieces (you need to be able to easily distinguish between them, and tell which team they are on), a pen, some paper, and a friend.

Here's a example of a Decoys board: 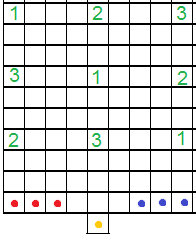 First step is to draw that board. I suggest making the squares about 1"x1". Mark the numbers in the squares exactly as the picture shows. You do not need to draw the dots, they're just there to indicate particular squares.

Objective: Capture your three Objective Points (OPs, green numbers) and get your spy to the Exit (yellow dot) OR eliminate your opponent's Spy.

Setup: Each player secretly chooses one of their three pieces to be their Spy, chooses a number 1, 2, or 3 to be their Objective Number (ON), and records this information on a scrap of paper, for honesty's sake. Players then arrange their pieces in any order on their starting squares. The other two pieces are referred to as Decoys.

Turns: On a player's turn they have three Movement Points (MPs) to spend on moving all three of their pieces. It costs one MP to move one piece one square in any direction (but not diagonally), so on a turn you could move all three pieces one square each, or one piece three sqaures, or one piece two squares and another one square. You do not have to spend all of your MPs in a turn, but you always start the turn with exactly three. Any number of pieces can occupy the same square. A player's turn is over when they declare it.

Capturing Objectives: Your ON determines which OPs you need to capture with your Spy - for example, if your ON is 1 then you need to capture OPs marked with a 1. To capture an OP, simply leave your Spy on a square marked with your ON during your opponents turn. The objective stays on the board, you only need to mentally keep track of what OPs you capture. Only a Spy can capture an OP, and only if it is a square matching the player's ON. A Spy can be left on an OP that doesn't match the player's ON but will not capture it. Decoys can be left on an OP during an opponent's turn but will not capture it.

Reaching the Exit: If a player captures all three of their OPs, they can move their Spy into the Exit, ending the game and winning. As soon as the Spy reaches the Exit square with three captured objectives, the game is over. Decoys cannot enter the Exit square.

Attacking: If a player thinks they know which of their opponent's pieces is the Spy, they can move their Spy to a square adjacent to the suspicious piece and declare an attack against it. To do this, the player must declare which piece they are attacking with, reveal that it is their Spy, and point out which piece they are attacking. The opponent then reveals whether or not the piece that is getting attacked is their Spy. If it is their Spy, then the game ends and the attacking player has won. If it is not their Spy, then the attacked Decoy piece is removed, the attacker's turn is over, and the game continues on.
#ShareonCommunityBlogs
Login to vote this up!

I love video games, but who doesn't?