The Best Playable Bears in Videogames 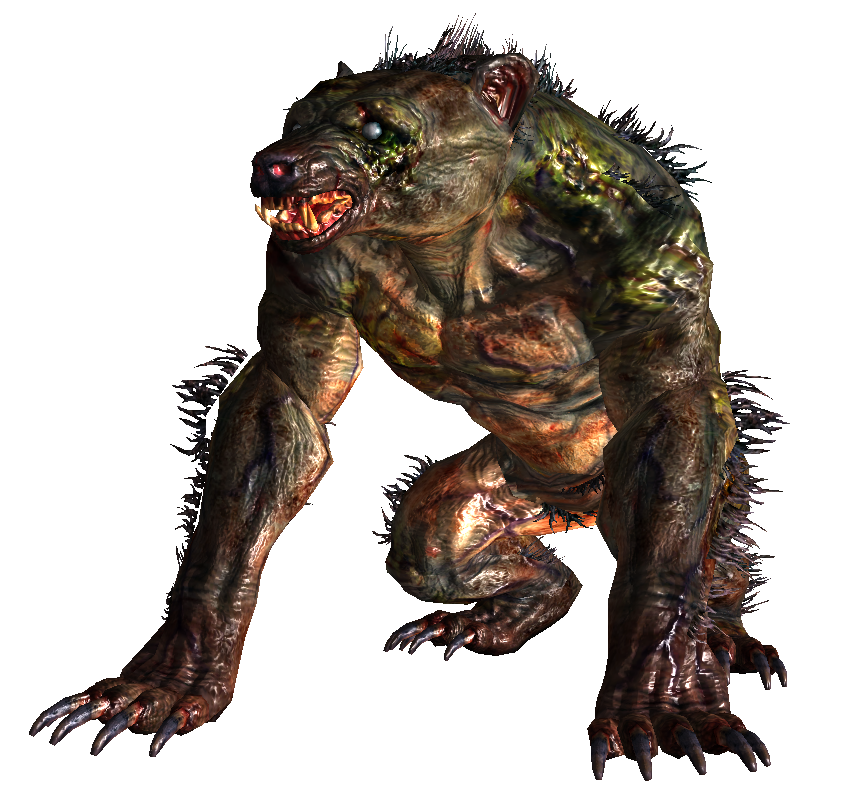 Bears. They're pretty much the scariest animal ever. I mean this both in general and in specifically in the medium of videogames. No matter how many thugs or dragons I've killed, every time I'm face to face with a bear, I find the situation frightening and a bit unsettling. Something about being threatened by a monster that you know for a fact actually exists and really could attack you amplifies the urgency of the battle.

That being said, it can also work the other way around. If a game gives me control of bear, I feel invincible. Bears make some of the best playable characters because they remind you that you are in fact playing a videogame, and in the end you are meant to be the most powerful thing onscreen. Take for example: 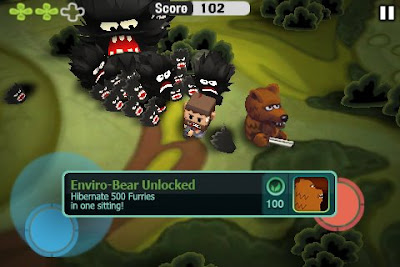 First I should clarify, Enviro-Bear is a guest character from a game actually called Enviro-Bear. However I don't have any experience with that game, and I would hate to pass up an opportunity to talk about Minigore 2, so the Enviro-Bear on this list is the one in Minigore 2.

Minigore 2 is the pinnacle of dual-stick shooters. Multiple varied levels, lots of upgradeable weapons and characters, onslaughts of enemies and bosses, and Arin Hansen's voice work. I would already recommend this game to anyone who does any sort of gaming on iOS. It's just icing on the cake that you can play as a bear. Specifically you can play as a bear who wields a chainsaw, which is all sorts of awesome. 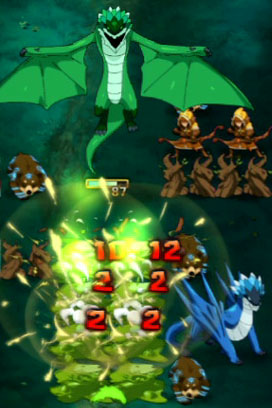 Puzzle games are awesome. Strategy games are also pretty great. In an era of putting genres together to make new games it seemed almost inevitable that these two would combine eventually. That's exactly what happened when Capybara Games made Might & Magic: Clash of Heroes. This game brilliantly turns your normal army of puzzle game pieces into an actual army of fantasy creatures and soldiers.

While this game is filled with the usual cliched units that would come with a fantasy game, such as elves, dragons, and demons, I find the bears to be a particularly interesting unit. I'm not entirely sure if I know why. Maybe it's because they give some needed brute strength to a faction of the game that focuses more on speed and agility (if you're wondering how that works in a puzzle game, believe me, you should just play it and see for yourself). Maybe it's because while other units have cartoony attack animations of shooting fireballs or swinging their swords, the bears just rush over to the other side of the field and maul anything in their way. Regardless, ordering a bear attack gives you a sense of satisfaction that's very hard to find when you're controlling tetriminos or puyo....poppers.

Every time I hear Tekken being compared to other fighters, I tend to hear the world realistic. I suppose calling Tekken realistic is a lot like saying Animal Crossing is an allegory for the Vietnam War: it's not exactly false (you are put in a foreign land alone, promised that you will accomplish great things, but are ultimately just left to do a daily perimeter check), but at the same time it's just not the point of the game. On one side of the argument, nobody is constantly throwing fireballs or doing flaming uppercuts, so it's more realistic than Street Fighter, and every female character is at least...physically possible, so it's more realistic than Dead or Alive. On the other side of the argument, you have characters that take the sense of realism and dropkick it into a brick wall. The most well known of these characters probably being Kuma.

Kuma is not just a bear. Kuma is Heihachi's pet bear; something that I believe actually somehow makes both of those characters exponentially cooler. However Kuma is not even just Heihachi's pet bear. He is Heihachi's pet bear that has been trained to fight. Where other companies might see a reason to simply create a npc for added backstory and stick him as an easter egg in the background of a stage, Namco decided to create a fully playable bear that knows karate. Also he's in love with a Panda and that's just adorable. 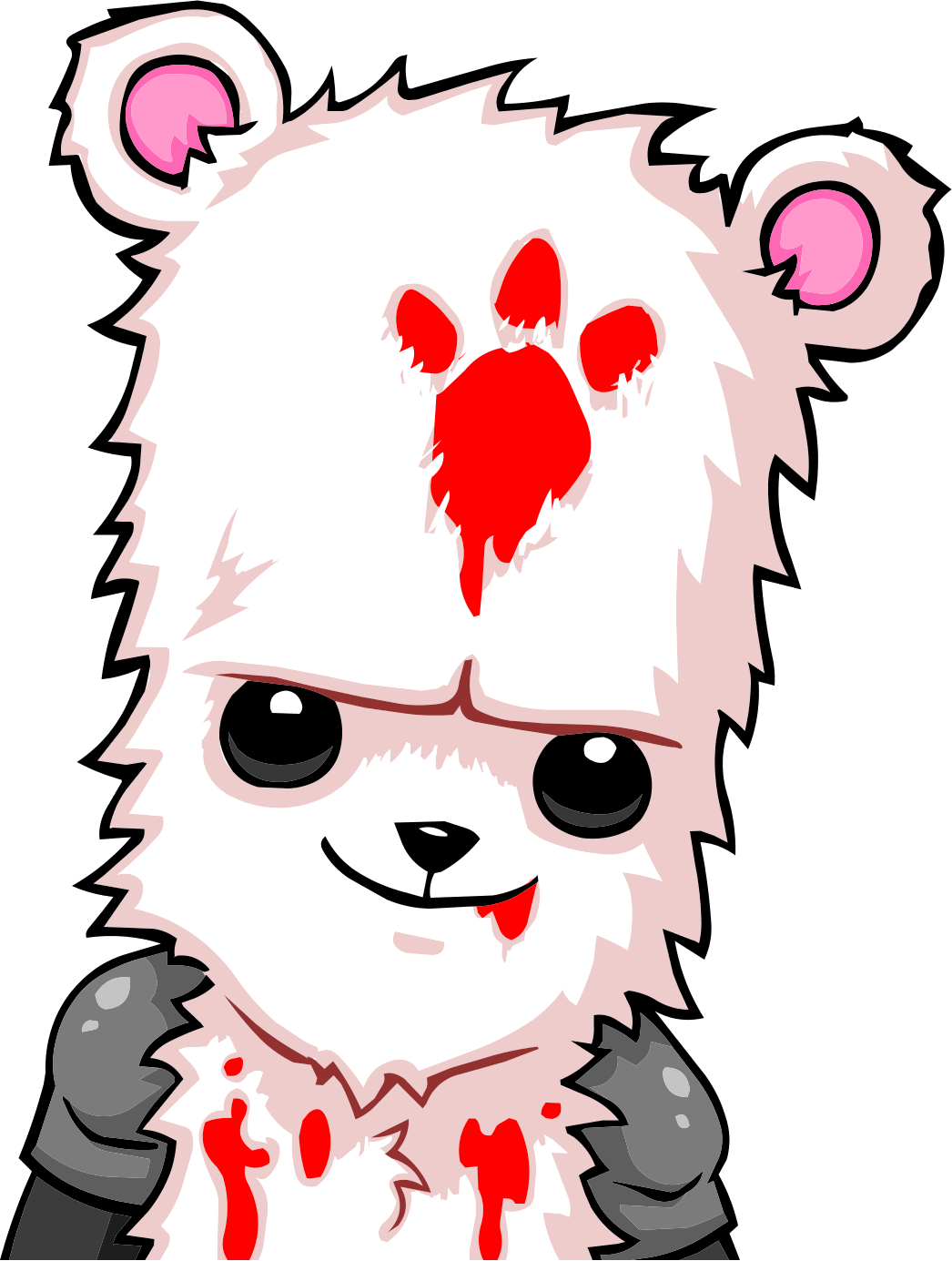 What is there to be said about Castle Crashers that hasn't already been said? It's a great game that has more or less revitalized the beat-em-up genre. It's one of the most fun gaming experiences you can possibly have with local multiplayer. Also there are a lot of playable characters. When I say "a lot" I mean to the point where just about every enemy you fight is a playable character levels of "a lot".

Oh, and guess what one of the enemies that you fight is; that's right, it's bears. Despite how similarly they may play to every one else, I find these bears to be a great break from the usual soldiers and bandits seen throughout the game. Their magic is also a bit more fun, because where other characters would just shoot an elemental blast in front of them, the bear turns into a tornado. I don't care how impractical that actually turns out to be. It's just cool! Also you can play as a bear who wields a chainsaw, which is all sorts of awesome.

Tokyo Jungle is a very unique game. It focuses on survival and scoring in a way that strongly reminds me of an old arcade game. One of it's most prominent features is the massive amount of playable animals. Ok, I realize I just made that point for Castle Crashers, but in this game it's even better, because characters are actually varied in an immediately noticeable way. However once again I think I'm going to have to say one of my favorite characters is the bear.

The bear is the heavy hitter of Tokyo Jungle. It may be a while before you catch anything, but when you do, that thing is dead. What was once a fast paced rush for survival, becomes a patient and methodical rampage of destruction.

You may have noticed that I specifically gave this spot to the panda, and there is a good reason for that. You see, there are three varieties of bear in Tokyo Jungle: the bear (a grizzly), the polar bear, and the panda. Of the three, the panda is the only herbivore. The panda doesn't need to have massive attack power, it just does. The other two bears kill everything in sight and then eat in order to survive. The panda kills everything in sight because it wants to. It leaves a trail of corpses wherever it goes just to let every thing else in the animal kingdom know that the panda is not a bear to be fucked with.

So what do you think? Have I left out any particularly awesome bears? Are there any other animals that make awesome playable characters? I'm very interested in what people have to say on the subject. And, of course, thank you for taking the time to read this. I greatly appreciate it.
Login to vote this up!

Actor, turned writer, turned doing whatever it takes to get by in this world while still feeling like I'm doing something creative that people get to enjoy. If you like podcasts that are currently on hiatus try my show Greg And Dylan Make A Podcast.