Valentine Gaming For The Chronically Miserable.

11:38 AM on 02.14.2013 (server time)    0
So it's Valentines day, that special day when you cuddle up with that special someone and do special things. Maybe you're going out to a nice meal? Seeing a movie? Or perhaps doing something so disgustingly inappropriate that I can't even mention it here? Oh, what a lovely time it is, how could anyone hate such a magical day?

So now that I'm out of snappy, lighthearted header territory, let's talk reality.

You're lonely, aren't you? No special someone for you. Maybe you made one too many dirty jokes, or maybe you realized those feelings just weren't genuine. Or maybe you just don't know how to approach a relationship, or just don't care. Lovey-dovey this, heart shaped that, it's enough to make you want to vomit before you've eaten a single piece of that clearance Valentines candy you bought at the drugstore.

What's there for us? Well, thankfully, we have videogames to fill that inoperable hole in our hearts. But just any games won't do, no, not at all. You need games that capture how you feel today, the anger, the frustration, all those emotions you thought were love, but now you know better. So come on, screw love, this is what you really need. 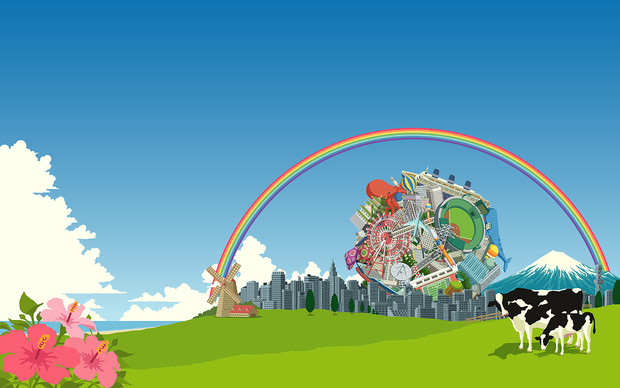 Maybe you just don't care anymore. You just wish you could roll it all up and blast it into the deepest reaches of space. Katamari can help. A game about complex relationships, but also a game about obsessively collecting to cover up your own insecurities. When you finally see all of the things you've acquired shot into the cosmos, you can't help but feel that a burden has been lifted off your shoulders. You can start fresh, new, and be anyone you want to be, because all those things are now in a giant mass of garbage that is rotting in space.

So there you have it. Valentines day isn't for you, and you don't need it. To hell with cards and flowers, those aren't your thing, and you're just fine with that. You can stand proud and say, well, something. I don't know what, that's for you to decide.

So, yeah, I wrote this. I'm one of those people. Certainly I don't mean to be depressing, because I know, and you should too, that even if you're alone on this day of togetherness, you don't need to let it get you down. Sometimes people like me just need to hear that, even if its...from myself.

So in a sense I'm my own Valentine.

I'll leave your mind to wander on that particular statement.
#ShareonCommunityBlogs
Login to vote this up!