GameCenter CX; A Show You Should Watch 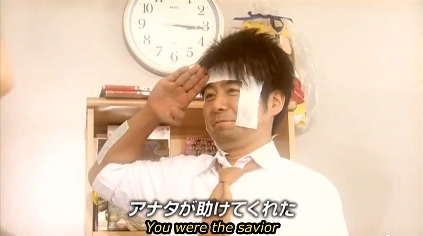 Gamer culture is one of those topics that just makes people groan, and justifiably so. It gets portrayed in a fairly ugly way for the most part. There are the onerous presentation style television programs, where two attractive white young people try their damnedest at zany banter, with interviews or other pointless on the scene footage cut in wherever it fits.

Or, of course, there are hollow attempts at some kind of referential humour, a la Big Bang Theory and many others. Do you remember Mario? I sure do. Surely this makes me part of a trendy community. I feel like we're in this together now. Is this a good enough attempt at having an actual personality? The Pac Man goes waka waka, I am told.

Certainly one of the problems is that these people are on the outside looking in. This is hardly new information, but we're seeing the youtube generation, and every teenage malcontent with a webcam and a nasally voice is excreting more high pitched squeaky video footage than a surgeon general would recommend you watch in a weekend, which is equally as banal.

Consuming a product doesn't necessarily indicate that one somehow becomes an expert on the topic, or a representative of that community in some way. Just look at how many people watch Master Chef and then suddenly decide that they're an artisan food critic, deeply passionate about gourmet cooking, haute cuisine and molecular gastronomy. There are just as many mongoloids inside the circle as there are out.

GameCenterCX is not a particularly new or innovative formula. A man sits down in a small room and plays old video games. A camera crew films him. Sometimes other staff members attempt to help him play.

There isn't really much here in this structure that you won't have seen before from countless lets plays, reviews, or whatever else, but this is a fairly reductive look at the show. While the core components amount to little, brought together, they create something compelling.

Our man in the vanguard, Shinya Arino, is a middle aged father of two who started life as a hotel chef, then began a career in comedy before landing on the show. He is not the sort of man you would pick for a television star. He has a wide range of bad haircuts, he isn't amazingly good looking, he does not have perfect teeth; the man isn't going to be taking George Clooney's place in coffee ads any time soon.

Arino isn't trying to be anything other than what he is, and neither is anything else on the show. They aren't trying to present this as something it isn't. There is no attractive young white girl with her meat out pretending she cares about the new Bioshock. It isn't a misguided kid with a mic pretending to be some kind of renaissance intellectual. It's just a middle aged man playing video games.

He isn't even great at them, either. In more or less every episode he routinely gets stuck for quite some time doing something simple like jumping over a pit, or navigating between two points. This isn't to say that he doesn't care about games; he's clearly a fan, he's just fairly bad.

It's one of the most simplistic, unpretentious pieces about games I've ever seen. There are other segments in between the footage of Arino playing the game du jour where he visits local arcades that people have written in to the show about to recommend.

A lot of which is just laughs at the man losing his pocket money on arcade cabinets, but again there are open faced moments that tie it together. Sometimes there are children who gather around to watch and shout out advice, sometimes he challenges other staff members or other arcade goers to a match he inevitably loses; in one memorable episode he even plays a few rounds of Metal Slug 2 with the elderly woman who owned the establishment, both of them laughing away.

In fact, that sentimental edge is present more often than not. In another episode, while playing Ghouls'n Ghosts, Arino plays through for around thirteen hours before coming close to just giving up. A staff member appeared with a letter that a twelve year old fan wrote to the show asking for him to keep trying for as long as he could, and telling him to remember his passion.

After that he's joined by two of the assistant directors on the show, and the three of them play through all night, until morning the next day. Again, this it's unlikely you haven't seen three people play through a video game on youtube somewhere before, but the way it's presented here just has a much more sincere connection.

Or in yet another episode, Arino plays Might Bomb Jack in front of a live audience, the first time they had tried something like that. It's a notoriously difficult game, and they cut it very close to running overtime from the window the television network gave them and having to shut it all off. Seeing the audience in the last few minutes cheer on this middle aged man playing a video game is brilliant; they're as excited as any football crowd.

It's been running in Japan for something like ten years now, and it's gained a massive following � there are from memory one hundred and something episodes. There isn't a more honest, endearing television show out there about video games. It's an important program, one that a lot of people should be taking lessons from. You'd be doing yourself a disservice by not checking it out at some point.
#ShareonCommunityBlogs
Login to vote this up!