The first hour of Antichamber is the best hour

“Antichamber is a psychological exploration puzzle game set within an Escher-like world. It’s a world where the rules don’t follow the same physical rules as other games would or our own world would.” -Alexander Bruce

When the example he gives is a “non-euclidian four-dimensional space”, you know you’re in for something really special. And it was, for the first hour, and here's why. 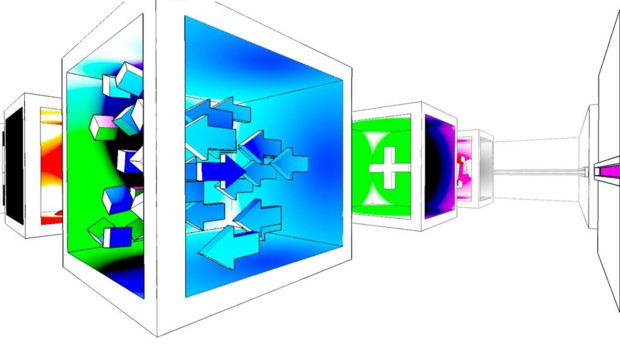 A gallery of sorts

One of the first locations you arrive at is a small room, a gallery of sorts, where there are cubes set in a grid-like pattern. To get to this location, you walk down a corridor, and from a short distance you can only see one side of a cube, with the letters L I F E appearing every time a pendulum ticks by the center. As you walk towards it, the space opens up to you, showing many of these cubes, all containing unique and colorful 3D images, such as electrons flying around a nucleus or sets of rocks orbiting a large central rock and being orbited by mini-rocks of its own.

The amazing thing is that depending on which side you view each cube from, you see a different “sculpture”. And I use the word “sculpture” loosely, because what you see varies from a globe spinning to a game of Pong being played to a cube floating in space surrounded by block arrows pointing at it from all directions. This seemingly simple scene not only illustrates the kind of mentality that Antichamber provides, but also shows the player that this sort of beauty can only be achieved in a videogame. Simple pictures or video can’t capture the ability to walk around in a fantastical space and observe everything as you please.

I wholeheartedly recommend the game to anyone who's even a little interested, because this sort of game needs to be experienced firsthand. I give the first hour of the game an unequivocal 10/10, and think that it's worth it for that amazing hour alone. And if you've played Antichamber, what did you think?