3:04 PM on 02.07.2013 (server time)    0
Full disclosure � never played a Devil May Cry game in my life, so to speak to the traits of the reboot in relation to its predecessors might be overstepping my boundaries a bit, but in terms of a singular game, DmC is stellar. Also, I usually don't post my reviews here and save them for my personal website while just leaving the interesting stuff for Destructoid, but with all the controversy over this title, I figured my two cents was overdue. 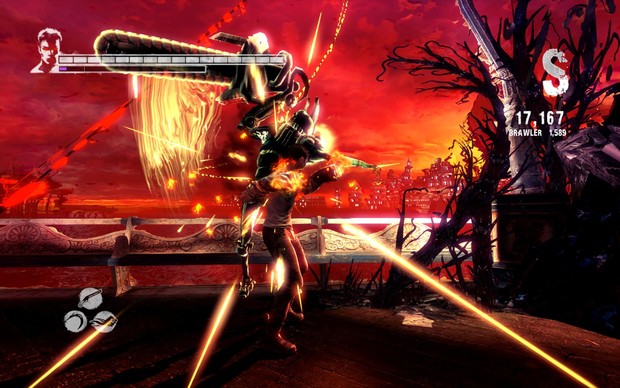 Graphically, this is a really pretty game, but shadows can be blocky, especially across faces, and it�s hard to say if this was an artistic decision or a glaring ugliness. The soundtrack is also killer. Under no other circumstances could I tolerate the heavy punk lining every level, but while tossing enemies to the skies and ripping them to shreds, there could be no other way about it.

The story, while somewhat predictable, is engaging enough. Ninja Theory recognized there wasn�t much to it, and so paced it pretty quickly so the player could go back and do it again. No one is very deep and Dante�s affection for the human Kat isn�t touching, but it�s better to take it for what it is, especially considering even Dante isn�t taking it very seriously. His conversations often consist of �Fuck you!� before tearing into battle. He does spin off a great one-liner once in a while, and it all rolls together to keep the game from being too dark and mundane.

More prevalent are the literary allusions. Using the Divine Comedy�s character�s names makes the game�s roots obvious, but the nature of the game can keep it subtle at the same time. While no one is surprised that Virgil is the leader of the Order that comes to recruit Dante, just as the writer Virgil led Dante Alighieri through hell in the Inferno, the relevance of Dante�s ascension of Mundus�s tower towards the later stages of the game didn�t resonate with me until Kat said �You�re going to have to go up five floors of hell.� Finance is located on the eighth floor of the building, and while fraud on this floor was likely, perhaps they would have been more appropriately located on the fourth floor with gluttony. Nonetheless, the more well-read of the game�s audience will appreciate the nod to 14th century Italian literature.

This is a game I�d love to get through again on a higher difficulty or two, so hopefully my backlog will allow it sooner than later.

Bottom Line: 9.5/10
#ShareonCommunityBlogs
Login to vote this up!