Sonic 4 is just as good as the Genesis classics

1:02 PM on 02.02.2013 (server time)    0
Ah, it's been a long time since I last blogged about anything.....ANY WHO, it's no surprise that I'm fixated on doing a blog on Sonic/Mario/Metal Gear once again blah blah blahh but enough about me, I'm here to say what some may call a bold (or stupid) claim, that is that after playing an immense amount of Sonic 4 and the other Genesis classics (CD included), it's safe for me to say that I enjoy Sonic 4 just as much as the other games because I find it to be really fun. This blog wouldn't be anything special if Sonic 4 was just some game I like, it's a game that many gamers find controversial for reasons of sorts. 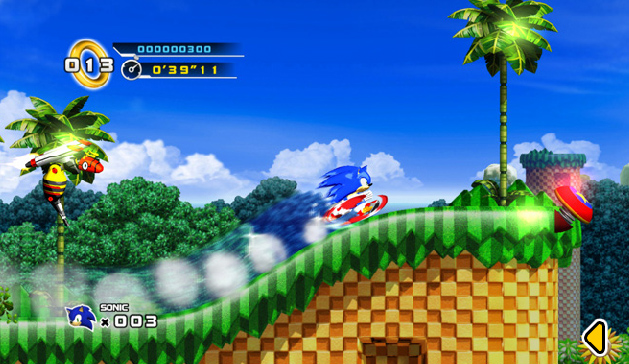 I'm not gonna even bore you with history details about Sonic that everyone loves to do when writing an article on him. I'll just say the reasons why the game to me measures up nicely with the others. First off the "physics" didn't really bother me, just a 5 second adjustment and there you go. There�s nothing about the games "physics" that stopped me from playing the game. You can make the physics look silly if you TRY. Phew! Still with me?

Sonic definitely has its strong moments, like the momentum based level design, the kind of design that makes sonic a fun game for me. Where you can go through a level in break neck speed if your skilled enough, the speed is the reward you earn from doing this. Levels like Mad Gear Zone and the Lost Labyrinth are great examples of that. In fact in order to get skilled in a level, you have to replay the levels, which bring me to my next point. Sonic games are meant to be replayed over and over again. Whenever I replay a new Sonic game I was just okay with, the experience is even better the first time and the game becomes much more enjoyable. This proves true with all the genesis games including Sonic 4, it went from being an okay game to being addictive, and I like my Sonic games addictive!

Cast and story are perfect

If there's one thing that Sonic 4 did right that everyone can agree with, it's that they removed the usual useless cast of characters. Episode 1 stayed true and focused only on Sonic and Eggman. Episode 2 did what is rare in Sonic games: expanding the cast with Likeable characters such as the always sometimes maybe helpful tails and the fan favorite robotic bad ass, Metal Sonic.

The story involves the Little Planet from Sonic CD making its annual return to Mobius/Earth/God knows where and Eggman plans to capture the helpless planet once again with the help of the newly revived Metal Sonic, Sonic joined by Tails now have to stop the two. Sonic 4 may have one of my favorite stories from a Sonic game all because of the perfect cast, well except Shadow the Hedgehog was just fucking hilarious. I mean, that game had the president, aliens, hooker bats, and uh, uhhhh, guns and shit, and uhh swearing, that�s FUCKING hardcore.

What makes it stand out from the others?

While Sonic 4 pays homage to its Genesis predecessors like the reduced cast, familiar zones, 2D gameplay, and the return of the lock-on feature (Who saw that coming?), the game also provides new features not seen in the Genesis games. The big feature in Sonic 4 is the inclusion of the homing attack where I got to admit, they did a good job of implementing in to a 2D game when the attack was originally created for attacking enemies in a 3D space. They also came up with fun gimmicks for each level like Sonic 3 did, like the torch light level and vine swinging, plus the airplane that you ride in this game is actually better than Sonic 2�s so I�ll give it credit for that. Another feature that is actually nice is how in a new game you can tackle any level in any order you want.

Tails is useful again you guys

Episode 2 decided to make Sonic and Tails work as a team and have them do special tag up moves. They can fly together which pretty much makes death pits less terrifying, they can also swim which is helpful for getting out of water for air, and they can do a death sphere like spin dash to plow through enemies and obstacles The Bosses be bossing it up kind of

The boss fights in Sonic 4 are 50:50, some weak, some good, and by that I mean the Metal Sonic boss fights are the best of the game, you really feel like you�re going all out with beating Metal Sonic. Eggman has his moments but some of his boss battles are boring, mainly from Episode 1. I do like how his battles are classic reimagining�s with a twist to throw you off, but the final boss in episode 1 is a real dick, especially with the surprise final attack it has. It�s also cool how the bosses are levels themselves and are separate from the 3 acts.

What I find to be the best feature of the game is Episode Metal. It�s a fun little bonus game you get for buying both episode�s 1 and 2. You take control of Metal Sonic who survived his battle in Sonic CD. He returns, gets revived and is on the hunt for Sonic as he explores 4 reworked stages from episode 1. Metal Sonic�s levels have that right amount of difficulty in them, and the level design is impressive. Despite their being only 4 levels, the levels are pretty damn repayable and are easily the best part of Sonic 4.

That�s really all I have to say about Sonic 4, the special stages are neat throwbacks, the soundtrack is hypnotically catchy, and to me, it did enough to set itself as a true sequel to golden age games. It makes me wish there was an episode 3 or a Sonic 5 to continue with, but if Episode 2 is truly the end, than that�s fine with me because it did what it what it wanted to do, recreate 2D Sonic. What do you think?
Login to vote this up!