The Best Special/Collectors editions of 2012 Part 2: Now with extra Crates!

11:06 AM on 01.31.2013 (server time)    0
Last week we took a look at critically acclaimed jungle shooter Far Cry 3 and what came inside the Insane edition, combining parts 2 and 3 this week will feature not one, nor two but three games of 2012 which took the term "Special edition" up a notch.

Borderlands 2 had a lot going for it on release, fans of the previous game wanted more cell shaded goodness and expectations were sky high for this over the top FPS/RPG hybrid. The Ultimate Loot Chest seemed a perfect fit to match the game's fairly bonkers approach. 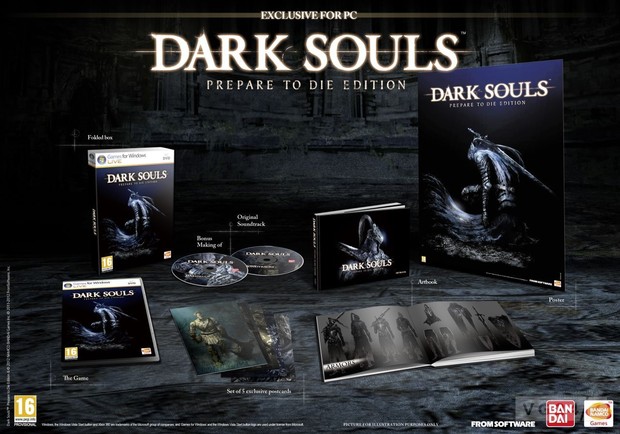 Starting off you get The game itself, boxed in new artwork designed for this edition, alongside this you get two more discs of content in the form of a Making of DVD and the Original soundtrack on physical CD. The inclusion of a physical soundtrack is a nice touch as most special editions now just contain a digital copy. Now I hope you like artwork because you get a lot of it, featured on a set of Five exclusive post cards, giant Dark Souls poster and finally a Hardback art book. The art for this game is truly great, it's certainly worth looking through the entire book for all the different environments, armours, weapons, enemies and the famous Dark Souls bosses who'll you grow to hate as you progress.

Digitally you get the previously exclusive Artorias of the Abyss DLC adding new areas, enemies and bosses to fight and get angry at all over again. The PC version was hit with a disappointing port, featuring a lowly 1024x720 resolution and 30FPS limit, not to mention unplayable keyboard and mouse control (really it is that bad), however a user by the name of Durante released a mod which fixed issues and overall improved the game dramatically. The mod allowed the user to go beyond 1080p, adjust the HUD and add or remove more visual effects. Using a controller with the game makes this the definitive version in the end and just shows what the community can do with Dark Souls in their hands.

2013 looks set already to offer some interesting editions with Bioshock infinite's Ultimate Songbird edition and The Last of us with multiple variants of collectibles. Other titles such as GTA V, although no special editions are confirmed, are sure to offer some special goodies.
#ShareonCommunityBlogs
Login to vote this up!