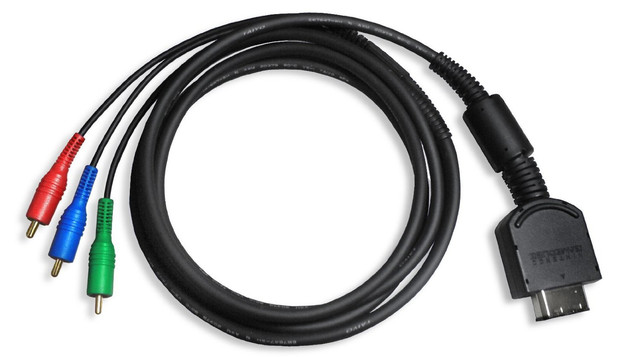 With my recent decision to revisit the last generation of consoles, I started to read about the mythical GameCube component cables. These cables are expensive, fairly hard to find and only work with pre-2004 systems. Luckily, my purple cube is one of those systems. Even better, I had $100 in Amazon credit and was able to find a new set of the cables for $150. So, like the fool I am, I bought it!

When the cables arrived yesterday, I grabbed my copy of F-Zero GX and got to work. The first thing I noticed was how heavy these cables are. The cables themselves are very thick and the connector, which apparently has a digital conversion chip in it, is very heavy. The cable themselves only have the video output connectors; the audio is handled by the A/V cable included with the system. I booted up the Cube using the standard cables and took a close look at the picture. I then added the component cables, rebooted the system while holding down the B button, which activates progressive scan, and took a close look.

Overall, the difference is pretty remarkable. Text and details are much clearer and the picture is overall less muddy. One of the reasons I chose F-Zero is that is supports widescreen as well as 480p resolution. In all honesty, F-Zero and Twilight Princess both look almost as good as Wii games. I was quite surprised by the difference. Colors are also much nicer. When I compared the video output of PS2 games to GameCube games on my HDTV, it's shocking how much better GC games look.

After my wife got home, I was playing Zelda and she was shocked at how much clearer it looked and decided that it was worth the cost. If you love GameCube and want the best video output, the cables are worth the money.

One last thing: Twilight Princess is much better on GameCube.
#ShareonCommunityBlogs
Login to vote this up!