The Most Overlooked Game of 2012

While it might seem a little late to still be doing “____ of 2012” articles, there are some things that cannot be left un-said. Amidst each year’s appalling disasters and critic’s darlings, there sits a graveyard of games neither brilliant nor terrible; merely “pretty good”. Such games can often be overlooked by the general public, be it because of a lack of marketing, an uninteresting concept, or because it isn’t a yearly sports title.

I am not talking about small, independent games funded and developed by one or two people; blatantly overlooked because the games budget can’t support a widespread release. I am talking about mainstream titles funded by big-money publishers, and developed by large teams of skilled individuals. Games that, for all intents and purposes, should be a success, but end up drowning in bargain bins surrounded by old copies of Too Human and Imagine: Girl Band.

For me, the most overlooked game of 2012 was one that failed in so many aspects, but its successes made it one of the most unique titles of the year. Poor Binary Domain, you were doomed from the start.

To pick up a copy of Binary Domain (which you should do, it’s very cheap now) on a store shelf would be an exercise in apathy. The games artwork proudly displays burly alpha males right out of the Gears of War playbook, fronted by a man who would win first place in a Chris Redfield lookalike competition. First impressions are definitely not BD’s forte.

Insert the game disc into your personal virtual entertainment noise box of choice, and be greeted by a bland, black and white menu screen, the navigation of which is accompanied by generic bleeps and bloops. Boot up the campaign, and witness the two seemingly worst game characters ever engaging in tired, cliché ridden dialogue. They crack wise, they spout one liners at break neck speed, they say vaguely homoerotic things in a schoolboy attempt to seem quirky, you know the score; it’s Army of Two but even less well-intentioned.

After what feels like an hour of tutorials accompanied by more inane, cringe worthy chit chat, Binary Domain starts to display signs of competence. Environments are sleek, detailed and suitably bleak for a digital dystopia, whilst combat is simple, engaging and fun.

All too often in the games industry, zombies are used as a means to provide mindless, morally justified murder. Binary Domain however, tries the same trick with robots; and the results are equally satisfying if not more so. By targeting individual body parts, the player can dismember or behead their robotic foes; disabling the enemy’s movement, accuracy or weaponry (and creating a glorious shower of metal to boot).

Sure, a solid shooter is fine, but we’ve seen plenty of those. Where Binary Domain retains some of its inherent Japanese-ness is in its boss fights. Only mere hours into the games robust campaign, players will face a large, spider-like robot the height of a skyscraper and the width of a football pitch. Fighting the boss is a pretty mundane affair (target the weak spots to disable the legs), but what stands out about it is its sheer size and scale. Other bosses in the game are equally aesthetically pleasing, often resembling mechanized versions of bosses from Bayonetta.

So we’ve established Binary Domain plays pretty well, surprisingly able to hold its own against most modern third person shooters, but this is not why the game has remained lodged somewhere in the weirder parts of my brain. No, Binary Domain is truly memorable for its ludicrous, yet often poignant story. The game follows Dan Marshall and his “rust crew”, an elite squad of soldiers from around the globe tasked with eliminating “Hollow Children”; robots that believe they are human.

The crew is essentially a who’s who of familiar videogame stereotypes: there’s the wise-cracking black sidekick (Big Bo), the needlessly sarcastic British guy (Charles), the butch girl who exists so the developers could say “Look she’s not hot! That’s respect!” and barely says two words throughout the game (Rachael). Not to mention that Dan essentially resembles every game protagonist to have been created in the last 10 years: stocky, dark hair, gruff manliness hidden beneath a thin veneer of what could almost be described as a sense of humour.

The plot itself is actually a refreshing blend of Blade Runner and Terminator, and as the story progresses the team begin to question the true nature of their orders, and what it really means to be human. Without spoiling anything for prospective players, one of Dan’s crew members is actually a “Hollow Child” and as events unfold, we begin to wonder what makes them any less human than their squishy, organ filled squad members.

As these questions start to arise, the games characters start to become more fleshed out too. Dan and Bo’s idiotic jokes seem to be a coping mechanism; one that wears off as the game progresses and they start to show signs of sensitivity and (gasp!) emotion. We start to learn more about Dan’s past and his mistrust towards robot-kind. 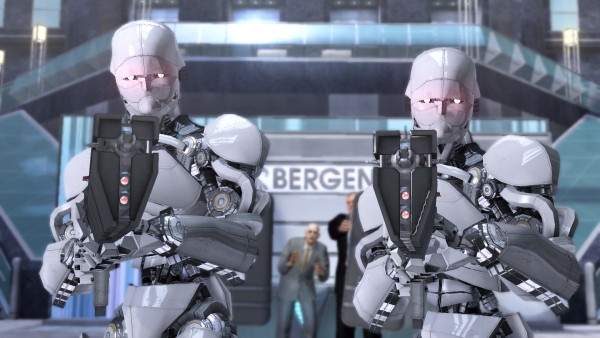 All of this culminated in a bat-shit crazy finale filled with death, totally unexpected betrayals, triple crosses, and (sorry but I’m going to have to SPOLIER ALERT here) the reveal that new robot human hybrids are being created that possess the ability to birth children. Robots; giving birth to robo-human children. Seriously, this happens.

I thoroughly disliked Binary Domain at first, but the deeper I delved into the story of Dan’s “rust crew” and the games intriguing sci-fi pseudo-utopian world, the more hooked I became. Binary Domain taught me that first impressions aren’t all they’re cracked up to be. I implore you dear reader, if you’ve the cash and time spare, please check out Binary Domain, and hopefully, you won’t regret it.
#ShareonCommunityBlogs
Login to vote this up!