11:54 AM on 01.17.2013 (server time)    0
Some of you may recall my foray from last month into the realm of free, horror-themed downloadable games. If not, you can read it here. I've been working my way through some more, and here's what I think of the latest batch I've played. 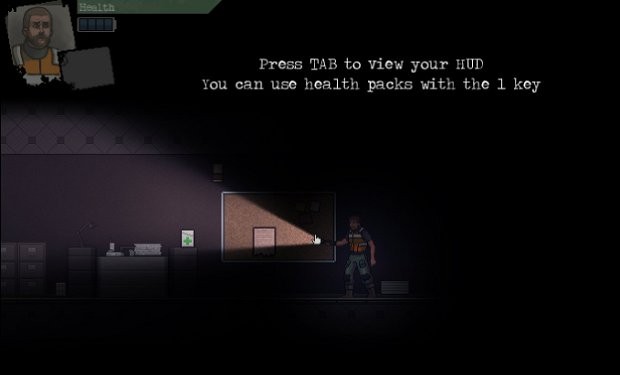 My most recent play on this list, Magnesium Ninja's Ascension, ditches the first-person trend to join games such as Lone Survivor and Home in the realm of 2-D, sidescrolling horror. As Atticus, a maintenance man for a mysterious, partially subterranean facility, you're forced to search for your daughter and your friend who was watching her after the power cuts out and things start going terribly wrong. With a well-detailed pixel art style intercut with hand-drawn story sequences, Ascension is a throwback to more classic survival horror, where powerlessness was the name of the game and combat was a last-ditch option. Even your flashlight use is something to worry about, and not solely due to battery consumption. It's not a very long play, given I managed to finish in one two hour session despite having quite a bit of trouble finding some items mid-game; that's my only complaint about Ascension, really, in that some of the key items you need to proceed are barely visible against the environment and are in no way highlighted, so a fair amount of mouse wiggling may be required to complete things.

While I'm here, it's worth mentioning that both Ascension and Imscared (which was featured in the first article) are highlighted in The Free Bundle, a new bundle (of sorts) that's trying to highlight free titles that people may've overlooked. All the games are downloadable individually, right from the main page, and there are also links to the games' homepages should you feel like donating a bit to their creators.

Also on the topic of horror, the crew behind Slender Man's Shadow, Dark Pathogen, have finally gotten around to releasing the "secret project" they announced in the middle of last year. All of the Slender Man's Shadow stages have been re-created using the Unity engine and gathered into a single executable, thereby bringing the entire, Eight Pages inspired collection to Mac and Linux users, where the original levels were PC-only. In addition, the new version adds a couple of extra levels: the long-teased Carnival stage, and a festive, albeit belated, Christmas Special level.

The bad news, if there is any to be had, is that this package is not free, but it'll only run you $6.99 for the combo platter. It's on Steam Green Light as well, so if you've already enjoyed some of the earlier levels (which are still free to download for PC at their homepage) or want to snag the free demo (which features Sanatorium, the original SMS stage, and the Christmas Special) and like that, feel free to give it some upvotes. If you'd like a bit more information on these Slender spin-offs, I already covered them in this article and this other article a couple of months ago.

Well, that's all I have for this round, but rest assured, there are more cheap scares to come. After all, I play (supposedly) spooky things every night on my Twitch.tv channel, though the series may be making a move elsewhere in the near future... Keep an eye out for an announcement to that effect, as well as on this cblog for more frugal frights.

* - That "case" pun was absolutely unintentional, but you best believe I left it in there on purpose once I noticed it.
#ShareonCommunityBlogs
Login to vote this up!