Ludo-Narrative Harmony in "The Walking Dead"

Anyway, I motherfucking loved The Walking Dead. And it wasn't just because of the amazing writing or voice acting or overall story, but it was because of the GAMEPLAY. Hear me out here. I'm not talking about the terrible shooting sequences, or the mediocre-at-best puzzles, or even the extremely forgettable QTEs. I'm talking about the most important interactive part of the game: the choices. The way The Walking Dead handles choices is a prime example of exploiting the medium's strengths to produce an experience that works beautifully.

The fact of the matter is, video games aren't very good at making your choices matter in a big way. It's very difficult to do well (see Mass Effect 3), as it requires tons of content production and writing and testing. Sure, there are many games that do it well (Fallouts, the Witchers), but we can all agree, those games are rare and difficult to pull off. There are those that have tried to make procedural stories, and maybe one day they'll crack that nut, but so far we don't know of any good algorithms or development approaches that does it reliably.

So what did Telltale do? They made a game where your choices don't matter all that much in the end. Sure, they matter in a localized manner, but at the end of the season, everyone's story converges to the same end result. For a game that's all about making choices, one might think, "holy crap they really fucked that up!"

And yet, why is the Walking Dead one of the best gaming experiences of 2012? Because it had very little ludo-narrative dissonance. It had....LUDO-NARRATIVE HARMONY. The game play was in perfect harmony with the story. Your choices in the game don't matter all that much in the end, and guess what: if the zombie-apocalypse were to actually happen, your choices won't matter all that much either. When the world goes to shit and you're just barely surviving, it doesn't really matter who you saved or how moral you were with your actions. When things are that fucked, you are probably just fucked, and anything you do only delays your inevitable death. You're going to arrive at your destination and find that the boats are all gone, and even if you did take off on a boat, are you even sure there's anything left in Atlanta? You're going to make friends only to later lose them to a bite, or you'll find out they're not your friends after all. Life is not fun in the zombie-apocalypse, and there's nothing you can do about it. Just like The Walking Dead.

And yet, you keep on. You can't lose hope no matter what. You have to show Clementine that even when things look terrible, you must keep pushing on as long as you have a breath left. And that's the one choice you can make in such a situation: You can persist. You can survive. You can continue to play, because you can't lose hope. You can't lose Clemetine. 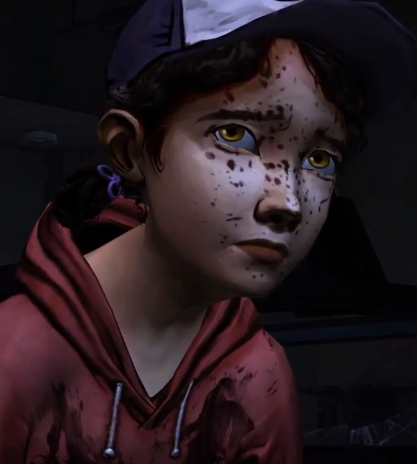 This is going to sound a bit cheesy, but TWD really made me appreciate the life that I do have. In the modern United States, my choices actually do matter in a lot of ways. I can affect my own career. I can choose what to eat and what to do for fun. I can choose to be a good citizen and enjoy the benefits of security (most of the time). I can choose to appreciate my family and friends, and reasonably assume that tomorrow, they will still be around. This is not true in many other countries out there. The Walking Dead could as well have been a game about refugees in the Congo, but that probably would not have sold as well as setting it in the zombie apocalypse.

Your choices don't matter that much, and that's what makes The Walking Dead a brilliant game.
#ShareonCommunityBlogs
Login to vote this up!