8:19 PM on 01.11.2013 (server time)    0
Well, with the retail version of The Walking Dead game sold out everywhere, I�m losing my conviction that despite my disinterest in the show and comics and the game itself until it started winning game of the year awards left and right, I need to play it. And with the WiiWare version of Retro City Rampage still not out, I�m thinking of giving up on waiting for that to come out before creating a best of 2012 list (technically it will be a 2013 release, after all).

So let�s do this! Here it is, my best of 2012 list! I�m doing it a bit differently than I have in past years because honestly there weren�t enough outstanding games to fill a top 10 list as sufficiently as I have the last four years. Don�t get me wrong, there were a lot of great games, but many were smaller games that didn�t occupy my time as fully, and that ultimately didn�t prove especially memorable. It may be my fault, perhaps lately I�ve been too choosy about what I play � Sleeping Dogs for example is a game I came close to playing and in past years may have, but I changed my mind last minute (same thing with The Walking Dead). Just know that I�m not complaining. After all, what I will probably remember 2012 best for (gaming-wise) is finally getting a chance to finish Majora�s Mask.

So what I�m going to do instead of a top-10 list, is just to highlight three games that I thought were truly outstanding. For a point of reference compared to my 2011 list, I don�t think any of these games are quite as good as my top 3 of that year, but they�d fit in somewhere between those three and my #4 game that year. Whereas no other game of 2012 did I like quite as much as my #10 game on that list. In short, these three games are what I consider the true must-plays of 2012.

In order of release date� and alphabetical order� and, uh, also in order of scale I guess� and obscurity� 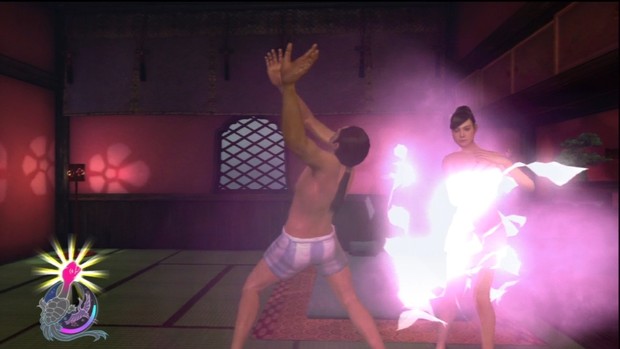 Anyway, it took me a while and some research to understand and get used to the game�s structure � this is a game you must play through multiple times to get anything out of � on subsequent play-throughs you can side with different factions and get different endings, and, crucially, everything you did on your first play-through is saved. It�s really interesting, and back when it first came out, and Destructoid wasn�t really covering it much, I was planning to do a review of it in my blog until Josh Tolentino finally wrote a great review of it, highlighting that the game�s weakness is in its failure to communicate its strengths, and it takes effort from the player to get into. But gosh, that effort is rewarded tenfold in silliness. I ultimately played this game over 30 hours, and I have so many good memories, from recruiting geisha to my dojo, to opening the language school so I could understand English, to lowering my crime rate so the stores would stock more clothes, to going fishing inside a bucket (and catching the �legendary fish� in there, no less), to completing ludicrous sidequests for the local vagabonds, to playing as an old man dressed in cat ears and cat paws who specializes in martial arts and performing the hilariously creepy sex mini-game. To following the path to the true ending, which, as stupid as the story of this game is most of the time, is actually kind of cool. No, it�s not a serious triple-A samurai open-world game (and you might need to visit its GameFAQs page a bit), but if you like somewhat unpolished open-world comedy games, like, say, Deadly Premonition� this was perhaps my favourite game of 2012.
Login to vote this up!