I Suck At Fighting Games: Dead or Alive 5

Before I start talking about this game, I think I should point out that I'm not trying to be condescending when I make certain statements. It just so happens that the particular feelings I have about this game might sound that way, and you should know that I'm definitely not trying to sound like a jerk...even though I might anyway.

The sentiment of �I understand why you like this, but I cannot like it� is what I'm referring to. People seem to get offended pretty often when someone else says this, maybe because they feel like they're being patronized. Unfortunately, this is exactly how I ended up feeling after spending a good amount of time playing this game.

I see many of the reasons why people enjoy this game, but for a variety of reasons that might only make sense to me, I cannot enjoy the gameplay Dead or Alive 5.

I like a lot of things about Dead or Alive 5, and I feel like I should outline what those things are before I go on. Now, I've never played any games in this series, so jumping right into the Story mode is a great idea, right?

Of course it was! I enjoyed the Story mode of Dead or Alive 5 a lot, probably because most of it was just incomprehensible. It's obvious that this is a story that has been ongoing for years now since the very first game. I respect their commitment to keeping up the storyline, especially in contrast to other games in the genre which either have no story at all, or have a lackluster story you don't care about, SOUL CALIBUR V.

So, it was cool seeing this pretty lengthy story mode with fully animated and voice acted cutscenes and excellent music. I was oddly captivated by the worst anime cliches, uncomfortable incest subtext, and the best fight over a dumpling that I've seen in any video game:

From the perspective of an outsider, this was like stepping in on episode 50 of an anime series I've never watched before. It's so utterly predictable in terms of all the anime tropes it hits that it should be annoying, but due to the great production values and oddly charming characters...it works. It really shouldn't, but it works.

Starting off on the Story mode was also a good idea because it is the closest thing the game has to an actual tutorial. You play as most of the characters on the roster, so you're getting fight experience with them that will hopefully aid in picking a character to stick with. Also, each Story mode match has a bonus objective which gives you an element of the game's systems and lets you put it into practice.

This starts with things as simple as �Land Mid Kicks� and goes all the way up to teaching you how systems like Power Blow and Critical Burst work.

I like how the game teaches you in a hands-on manner. At the same time, I have a few problems with the teaching of the systems ONLY being in Story mode.

If you want to go back to see a lesson again, they are not clearly marked. The chapters are organized by character and name, but you cannot tell which chapter contains which lesson. I wanted to go back into the Story mode to practice Combo Throws. So to find what chapter contains the Combo Throws lesson, I had to look it up online. I don't think I should have to do that! Either label them clearly in your Story mode, or put a Tutorial option somewhere else in the game where they ARE clearly labeled.

You can only practice these tutorials while a pretty tough AI beats on you. I found myself getting knocked out sometimes before I could even complete certain tutorials because you're expected to defend yourself AND do commands which are sometimes, quite difficult. 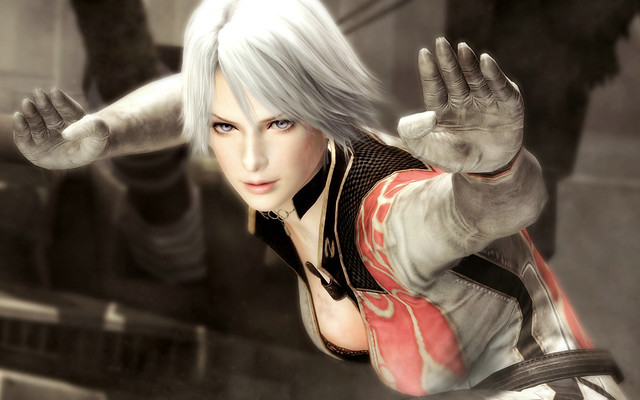 This is somewhat balanced by the game's Training mode, which is very well developed. It's easy to set up your AI opponent to do certain moves. For example, I had to set them to do every height of punch and kick because I wasn't going to go back into Story mode to try to find the mission that tells you that Forward+Hold is your counter against middle kicks.

The Training mode has every feature one could ask for in a Training mode. A wealth of options to customize every aspect of the AI's behavior, input display and frame details, and an option to jump directly into Command Training without a load time.

Command Training isn't perfect, however. At any time, you can click in the right analog stick to watch the AI demonstrate what you should be doing. I found myself needing this more than once on moves when the timing was unclear. The complaint I have is that I'm using an arcade stick, which only has one analog stick. And it's definitely not a right one. So if I needed to see a demo, as I often did, I had to have a regular controller handy to do so. Maybe it's the game's way of subtly telling me that I should be using a normal controller, but I tried and the arcade stick is more comfortable for me. Sorry!

Also, a few moves have notations that aren't entirely clear. What's the difference between white arrow and a black one? The game doesn't really tell you, so I had to find out for myself that white arrows mean hold this direction while pressing a button, and black arrows mean tap the direction and the button at the same time. What does it mean when a button has a white arrow on top of it? Or when they have smaller arrows stuck to the top-right or bottom-right of them? Well, I don't know and the game won't tell you. I assume that's something else I'd have to look up on the internet.

It may seem nitpicky but I have played other games that clearly spell out the notation for each arrow and allow you to view move demonstrations in Training mode even if you're using a non-standard controller.


This is one Command Training that I don't think I can ever finish.

My next few points get more into the territory of things that probably wouldn't bother me as much if I was a veteran of Dead or Alive games. Since I'm not, I just found a few things to feel weird to me in the gameplay. It's not something I expect everyone to relate to, but hopefully I can explain in more detail why this game doesn't feel natural to me.

When you hold back, you block. There is also a Hold button which blocks as well. This is a little redundant to me. Sometimes I don't want to block, I just want to walk backwards and put some space between myself and my opponent. However, the game is forcing me to block and move backwards really slowly, which doesn't help with the �putting space between us� part.

In theory, I really like the idea of Holds. Few games have options to get out of long combos, and in some of them it can feel unfair as you get juggled through the air with no way to really stop it. Having a hard counter is a good idea in theory. In practice, Holds became necessary too often for my liking. Each character has a fair amount of moves that put you in a stunned state. You can't do anything in this state except Hold, and if you guess wrong you'll be very vulnerable, take extra damage, and possibly be juggled into the air where you are defenseless until you hit the ground. I started feeling like there was no reason to Hold unless I was put in a state where I could ONLY Hold.

I may be describing the system badly, but it's something that's about feel for me. I didn't feel like using Holds was necessary when it usually led to me messing up the Hold and taking extra damage. Throws seem to miss unless your opponent is a completely neutral state, but sometimes even that wasn't guaranteed, so I found myself using less Throws as I played more and more.

The Power Blow is a sort of super attack that any character can use once their health bar gets low enough. It has a long charging period where you are vulnerable, however. The move does a lot of damage and could be a legitimate comeback mechanic if you weren't so vulnerable during it. It's quite easy to predict when a Power Blow is being charged and either step out of the way or just hit someone out of it. Good idea in theory, but not in practice.

I like the ideas the game has, but when I was actually playing I found that the best option was to knock your opponent into the air and juggle them as much as I could. The combination of feeling bored by the gameplay and not finding any character that fit my playstyle may be something that only I experience. I am by no means saying Dead or Alive 5 isn't a good game. It's just not a game I can enjoy.

What I Liked:
-The ridiculous, hilarious, and surprisingly well-produced Story mode.

-The soundtrack. Half of it is so bad that it's good, and the other half is so good that it's great.

-The presentation. The character models all look great and the effect of them sweating and getting dirt on their clothes as they fight looks much better than expected. Each level having multiple stages and hazards makes fighting in them feel different, which is something that most fighting games don't have.

-Training Mode is one of the best in the genre and has every option you'd ever want.

-Some awkwardness in character movement. Throws seemed to miss when they shouldn't, holding Back to block and having a Block button seemed redundant. The Hold system in general.

-No dedicated tutorial mode, which meant hunting through the Story mode or looking up certain tutorials online.

There's a lot of this game that makes me wish I could like it. The characters are interesting and unique, the stage hazards add to the gameplay without feeling unfair, and that soundtrack is so awful. And so good. I will recommend playing this game if you have an interest in it, as I feel like it is accessible despite the slightly screwed-up method of teaching game mechanics. In the end, my dislike of the game came down to it feeling a bit clunky for me and not finding any character that �clicked�, and that's something completely subjective to me. In the end, it's just not something I could see myself spending a lot of time playing but I can see the appeal.

It's a weird feeling.

I'm running a little low on current fighting games that I'm interested in playing, so I'm thinking of a slightly different idea for the next time I do one of these. I'm thinking of playing an older game that isn't part of the current wave of fighting games. A lot of them came out in 2012, but there are a few games that came out before the current "wave" that I'm interested in. Or I'll just finally cover Street Fighter X Tekken. We'll see.
#ShareonCommunityBlogs
Login to vote this up!