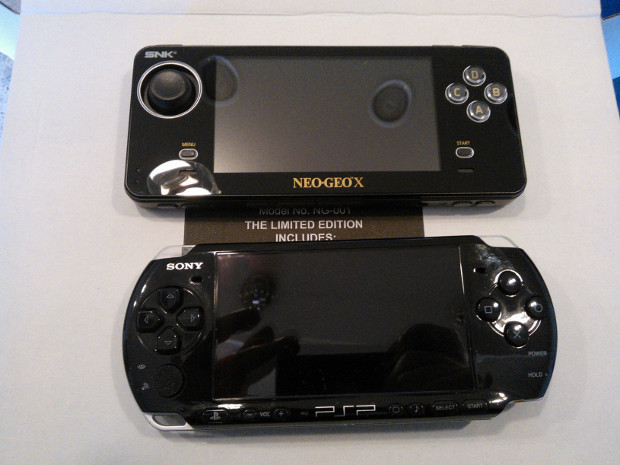 The dock itself feels very nice. The plastic does not feel too rugged but it closes nicely with a very satisfying click. I've seen comments that the dock does not close well and this is not my experience.

Output
I haven't tested the standard outputs but the HDMI works fine. The pixels are very sharp and beautiful. It's perfect for the retro pixel-loving gamers like me.

Stick
The stick included is a standard Neo Geo stick. It feels very similar to the PS2 and PS3 Neo Geo sticks released but the stick is a bit tighter and it lacks the 4 left and right buttons. Another question I had was stick compatibility. The Neo Geo X will recognize the PS3 Neo Geo stick. The stick and main buttons are recognized; the L and R buttons are not. The only problem here is that the ratio cannot be changed without opening the dock. I tried several other sticks to no avail; no Hori sticks were recognized and the PS3 Neo Geo pad is also incompatible.

Other thoughts
I really like the Neo Geo X. The handheld feels great and has a very nice screen. The dock provides the look and experience I want. The handheld doesn't have any sort of start up sound and the dock doesn't have a power light so hitting the On switch and having no immediate indicator light up is sort of weird in this era. The OS is simple and has a slight hint of lag when scrolling but is still better than the Vita interface. The emulation seems to be really good. I compared SamSho and Baseball Stars 2 with their Neo Geo Station counterpart and both felt the same. The Neo Geo Station games looked a bit better since they are displayed smaller on screen but the gameplay felt identical.

Overall, I love this system and, if it gets great support from Tommo or, if they fail and the system is hacked, it may well be my "Next Gen" system.

Update: The Neo Geo X stick works on the PS3!
Login to vote this up!