Seeing the Big Picture through Steam 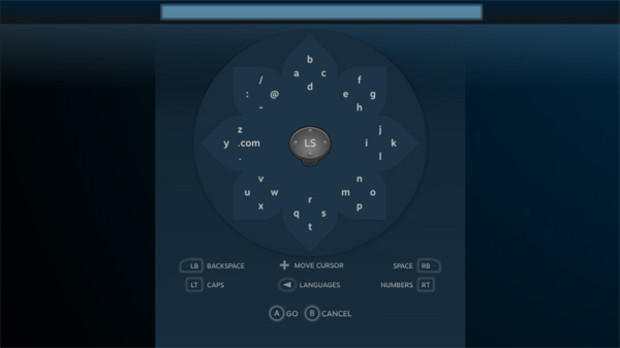 Typing is an interesting experience in Big Picture mode, but it was really easy to get into. All you do is hold the left joystick in one of eight directions, and then use the face buttons to choose the letter to type. It's obviously nowhere near as quick as using a keyboard, and there's no way in hell I typed this blog using that method, but for some quick Google searches or text chats during a game, it's quite sufficient. I found myself typing rather quickly without making any mistakes within a couple minutes, and the shortcuts to type stuff like ".com" in one click made things a lot easier, as well. The browser loads fairly quickly, although the scrolling can be a bit jarring -- You use the left joystick to scroll the page, but the focus is actually dead-center, so rather than scrolling the page around, you're technically scrolling the screen itself around. You need to find what you want to read, and put it in the middle of the screen. It reminded me a bit of using an iOS or Android browser, but without touch sensitivity. (To be honest, I won't be surprised if touch support happens in the future.)

Overall, I'm really pleased with how Steam's Big Picture mode worked out. I have a laptop, which I literally put on my lap when I use it, and even then, I wanted to pull a controller out and use it instead of Steam's original UI. In fact, I think it actually runs BETTER than the original interface.
#ShareonCommunityBlogs
Login to vote this up!