For Your Re-Consideration: Sonic 3D Blast

It's no secret that the internet can be an overtly negative place to hang out sometimes and when it comes to bloggers and journalists, there's certainly no shortage of the angry critic. While several internet personalities are quite talented at implementing their perceived rage when approaching a review or retrospective I see no point in trying to do something that has been done before on countless prior occasions. Instead, I'd like to try things a little differently and speak up for the underdogs out there. For Your Re-Consideration is a (planned) series of overviews that highlights the brighter aspects of games, hardware and other things in nerd culture that seem to be the whipping boys in their respective fandoms. To be clear, these articles are not meant to be unbiased critiques, many of the negative attributes surrounding these subjects are well-known popular opinion. Instead, this is just an encouragement to give something another look.

After the release of the Sega Saturn, gamers eagerly awaited Sonic the Hedgehog's debut on the new 32-bit platform. Afterall, Sonic is Sega's mascot and it may be hard to remember sometimes but Sonic used to be a real big deal in the gaming world. Sonic the Hedgehog was an icon, one of gaming's largest franchises and most importantly he was a system seller. Many in the industry attribute the Sega Genesis' success to Sonic and if the Saturn was to succeed, it would need a new Sonic title to showcase the console's features just as the original game did in 1991. Despite launching the Saturn without the blue blur, Sega immediately went to work developing a new game that would do just that. that game was Sonic X-treme.

Sonic X-treme was being developed by Sega of America while Japan's Sonic Team was busy working on a new title called NiGHTS into Dreams... To say that Sonic X-treme went through a rough development cycle would be something of an understatement. Regardless, the title was canceled after multiple engine changes and other setbacks. This created a dilemma of sorts for Sega who had hoped to release a new Sonic title before Christmas in 1996. But Sega had already given the Sonic franchise to a little known developer in the U.K. by the name of Traveller's Tales and they were hard at work on a 3D Sonic title for the Genesis. Sega made the decision to release the title on both of their consoles with an enhanced version gracing the Saturn to fill the void left behind by Sonic X-treme.

Sonic 3D Blast was released at the end of 1996 and the title was polarizing for fans and critics alike. I've always been a huge Sonic fan and the prospect of playing a new Sonic game, especially one that was seemingly "next-gen", was enticing to say the least. The fact that Sonic's latest adventure didn't require the purchase of a Saturn was another selling point because I wouldn't obtain one until 2001. Instead, I was more than happy to play 3D Blast on the Genesis and when I first booted up that cartridge I was treated to one of my favourite Sonic games ever. Sonic 3D Blast features what are likely the most stunning visuals the Genesis could ever produce. Traveller's Tales used pre-rendered cgi models (similar to Donkey Kong Country on the SNES) to great effect. For the first time ever Sonic's world is fully realized in 3D and it was positively awe-inspiring. The zones were colourful and vibrant, the character models were very animated and the world seemed alive. Also deserving of mention is the soundtrack, the music arranged for 3D Blast is some of the best the series has ever seen and shouldn't be overlooked for any reason.

Of course, moving into the 3D space meant some game changers for Sonic. The development team uses the 3D environments to great effect to create some really inspired level designs. Frequently you'll be able to see secrets and hidden areas above or below your location but you'll be unable to reach them. This game also features the introduction of Sonic's homing attack (called his blast attack at the time) which would become a series mainstay in the future, but unlike later games in the series it isn't available to the player all of the time. This helps to keep the player from using the attack as a crutch, forcing them to use precision in every encounter. And you will encounter enemies, because unlike previous titles in the series Sonic will need to actively pursue and destroy robots as a necessary objective before proceeding in the level. 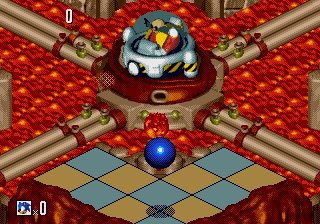 The game features a wide variety of locations, many of which are seemingly based on previous zones in the series. But you'll feel like you're experiencing the series all over again when you witness the worlds in 3D for the first time. Moving in all directions opens the game space up to more exploration without sacrificing the sense of speed from the originals. The player will also have to move quickly and deliberately throughout the game while being mindful of their surroundings. Nowhere is this more true than during the game's fantastic boss encounters with Dr. Robotnik. The game's boss battles are very intense and moving carefully while dodging projectiles and assaults can be tricky, but success is made all the more rewarding.

Sonic 3D Blast is something of a unique entry in the series. It's status in the gaming community no doubt stems from how different it is from all the other Sonic titles. However, upon further inspection I'm certain you'll see just how much has managed to stay the same for Sonic in his transition into 3D. Perhaps the game's place in history is deserved but things always look different in hindsight. If you find the opportunity, give Sonic 3D Blast another chance and give it some Re-Consideration.

Sonic 3D Blast is available on the Wii Virtual Console for 800 points & on PC through Steam for $4.99. This article was written after having played the title again on Wii.