The original Assassin’s Creed, despite its repetitive “information gathering” missions and rather silly plot, was pretty great. It was essentially a series of assassination missions, wherein the player could plan their attack route and stealthily approach their target, all of which was tied together within a strange conspiracy theory plot.

Forget weird, glowing apples. Forget being chased down by guards for riding your horse too fast. Forget: “A crusade for what?! Ignorance?! Violence?! Madness?!” When it came to stabbing people, Assassin’s Creed did a pretty good job.

It allowed for a decent amount of choice when plotting assaults, and required a substantial, but not unreasonable, amount of forethought in order to take out a target without being spotted.

I don’t know if you’ve played an Assassin’s Creed game recently, but these elements feel somewhat dialled back or toned down in new instalments of the series.

When did real estate become the new stabbing people? It all began with Assassin’s Creed 2; still a game about an assassin embroiled in a war with the Templars, but something with some interesting new twists. Ubisoft tried to include more RPG elements this time around, allowing the player to buy new outfits for Ezio, purchase more weapons, invest in local shops, and even renovate his family’s countryside villa. Great; now I can kill people, become a property tycoon, and dress like a flamboyant twat.

Despite all these extra activities, AC2 was still a game about assassination, and the game’s improved open world still allowed for different approaches to dispatching assassination targets effectively.

The problem I have isn’t with Assassin’s Creed 2, it’s with what it paved the way for. With each new instalment, AC games have provided players with more and more mindless activities to complete in order to fill out some sort of strange Assassin’s quota or checklist. Most of these activities aren’t even fun, rather they just provide players with something to do, creating the illusion of gameplay depth.

As I played Assassin’s Creed: Brotherhood, and tried, as best I could, to ignore the game’s cesspit of micromanagement tasks; I realised something. Now, with the implementation of the “Brotherhood”, I didn’t even have to kill anyone. I could leave behind all that tedious, oafish assassinating and sneaking, and instead focus on far more engaging tasks like dying my clothes and collecting feathers. Why bother putting in all that effort to kill anyone, when I can order some faceless nobodies to do it for me, as I sit in a large leather armchair, masturbating into all the flags I’ve collected.

In all seriousness though, to call Brotherhood an AC game would be to completely ignore what an assassin is and does. Mundanity’s Creed would have been a far more fitting name.

This is where we come to Dishonored, whose publishers had the stones to release their game a mere three weeks before the highly anticipated release of that other game about stabbing people: Assassin’s Creed: III. This might seem like a foolish move, but when you consider that Dishonored is actually a game about assassinating people, rather than a game about seeing how many icons you can erase from your mini-map, Bethesda probably made the right choice.

Dishonored did a lot of great things, but by far its weirdest quality, was the way it reminded me of how good Assassin’s Creed could be, if it was anything like it was supposed to be. As I slid Corvo’s blade into the neck of another morally stunted aristocrat, I was hit with a revelation. I realised that, with its open, sandbox level design and its deep, varied missions, Dishonored was exactly the game I was expecting every time I slipped an AC game into my Xbox. 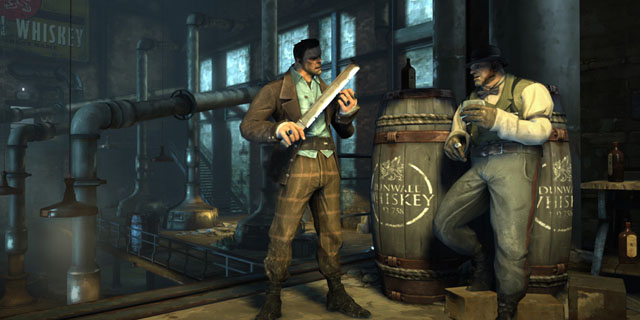 Dishonored cares little for management tasks, there are no arbitrary racing missions, and, despite Corvo residing in the hub world; “The Hound Pits Pub”, there were no meaningless renovation tasks. Instead, the game allowed me to focus on honing my stealth/combat skills in order to best eliminate my enemies. A game that revolves around killing people with sharp objects actually lets me kill people with sharp objects!

You might think I’m simplifying these games a gross amount, but I feel like the Assassin’s Creed series is selling itself as something it isn’t. The post AC1 games were regarded as “more streamlined” than the original game, but considering their total lack of focus or direction, and their desire to constantly barrage you with new tasks makes them feel far less streamlined to me. Ubisoft doesn’t seem to realise that, often, to streamline a piece of entertainment, a “less is more” attitude is often essential.

In fact, if you play Assassin’s Creed 1, then play Dishonored; they actually feel pretty similar in a lot of ways. Rather than a cluttered mess of odd jobs and fetch quests, most activities in both games are important to the game’s storyline, or, at least, important to the player’s enjoyment of the game.

Maybe Ubisoft could take some pointers from Arkane Studios, and realise that bigger isn’t always better.
#ShareonCommunityBlogs
Login to vote this up!