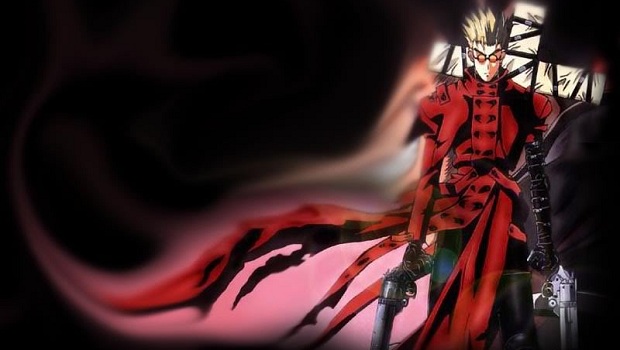 Game wise, imagine Red Dead Redemption with a shot of sci-fi and less donkey lady. You�d kind of have an idea from what I�d expect from a video game set in the Trigun universe.

Vash the Stampede is the main character from a manga & anime known as Trigun, you probably heard of it thanks to its run on Cartoon Network. Trigun also has one of the cooler intro themes this side of Power Rangers. The world Trigun takes place on has a mix of spaghetti western and science fiction tropes (probably more of the former than the latter). Vash has arguably the worst luck in the world as any place he goes tends to get wrecked by or due to him, almost always unintentionally. This earns him the nickname �the humanoid typhoon�, gets an unrealistically high bounty placed on his head, and is classified as a walking natural disaster. He�s like Godzilla if Godzilla was clumsy and wore a pretty cool red duster.

Because of his astronomical bounty he generally has a reputation of being some super badass outlaw (which kind of parallels real life old west reputations of outlaws who had reputations that far exceeded their actual accolades). Thus when most people meet the actual Vash the Stampede, they don�t believe it�s actually him since the real Vash is a goofy character who tends to fawn over the first pretty girl he sees (which ads a nice comedic effect to everything).

Vash isn�t exactly human (not at all technically, but that potentially goes into spoilers). He has an evil twin brother named Knives, who is apathetic towards humans (oh my, a handgun toting main character in a red coat who has an evil twin brother? I wonder where Devil May Cry got that idea from). Knives forms a group called the Gung-Ho Guns who effectively act on his will, this group consists of essentially super-awesome bounty hunters that totally wouldn�t be the bosses of a potential Trigun video game. Notable characters here include Legato Bluesummers, a character who�s objective is specifically to make Vash�s life a living hell (the anime version of this character is substantially cooler than his manga counterpart), or Midvalley the Hornfreak � a character who uses a baritone saxophone as a weapon (really).

Sorry Trigun fans, I know I�m skipping a lot of other potentially important or noteworthy information but I don�t want to tread on this too much. I�ll just say that the universe of Trigun and pretty crazy characters that exist in it would make for some potentially fun video game shenanigans.
Login to vote this up!