9:51 AM on 11.21.2012 (server time)    0
Whilst browsing the internet earlier on I found a blog entry which contains details of Playdead studios (creators of the indie game Limbo) second game.
Curious to find out more I headed over to their official website and came across an advertisement for the collectors edition of Limbo, and it was for sale at Amazon for a stupidly low price (around �15 in the UK, not sure about the USA). 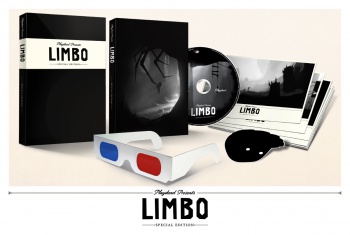 The special edition comes with a stylish case, some cool art prints and a sticker of the player characters head, and as I am someone who would have willingly paid �15 for the game alone this was a steal for me.
As I was entering my Paypal details I got to thinking as to why I love Limbo so much, it is definitely one of my favourite games, despite it lacking many of the features which I enjoy in videogames;
I like my games to be colourful, Limbo is black, white and grey.
I like my games to have a rich story, Limbo's story is one line that's shown on the box,
I like my games to have complex characters and villains, Limbo has a small child and a big spider.

This being said, I think my appreciation for Limbo stems from something more than just the visual and the written, it is the aesthetic and the feelings that the game provides that really draws me in.
Between the bleak background art, the moody lighting and Martin Stig Andersen's chilling ambient soundtrack, Limbo is brought to life. Mix in the tight gameplay and the ludicrously sly traps that can sometimes make the game play like a black comedy and you get a formula which simply tastes of success.

In short, I love Limbo because it is fucked up.

It is also the same reason I love Adventure Time, to me that show has many similarities to Courage the Cowardly dog, which at it's core was messed up. It wouldn't surprise me if that show was revealed to have been written by inmates at a psycho-ward.

I mean, how many of you guys have lost sleep because of this guy!? There are many ways to create horror, the jump scares of Dead Space and Resident Evil and the crushing dread of Amnesia and Silent Hill are both excellent when executed correctly, yet videogames as of late seem to have lost the ability to be subtle, with many "horror" games going for cheap and poorly executed jump scares and shying away from the much more effective method of inspiring terror in the player through the rare ingredients of atmosphere and pacing.

What's even rarer in videogames however, is showing restraint.

Nearly every horror developer seems to just want to go:
"Look, look how clever we are and how much money we spent on brilliant writing, here you go have it all now and then maybe you can have some more guns, it's what you nerds like isn't it?
Huh? No, I've never heard of context is that some kind of gore engine?"

The only 2 recent examples I can think of where a game has just created a world and let the player get lost in it are Amnesia and Limbo, and before then Silent Hill 2. These were games that were happy for the player to just get stuck in and have the story come to them as naturally as possible (well for Amnesia and SH2 anyway, it's laughable to think that Playdead has a writing department).

Hopefully though this is all a phase due to the HD generation and the acceptance of videogames as an art form in the public eye, and the release of Playdeads "difficult second album" (currently known as "Project 2") will herald a new age of colour, fun and pant-wetting fright. So come on Playdead Studios, is this your "Colour and the Shape" or is it going to be your "Room on Fire"?
#ShareonCommunityBlogs
Login to vote this up!