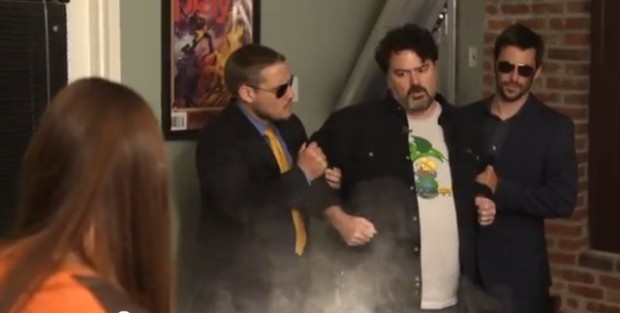 Want to be apart of gaming history?
Want to be an early tester for four future Double Fine titles?
Want to vote on what those future titles will be?
Want to own six limited release prototypes for Double Fine games?

Now is your chance!

An annual ritual at Double Fine is upon us and this year Tim Schafer wants to share it with you. Amnesia Fortnight was created back in 2007/2008 as a way to boost employee morale after the company was dropped by Activision and signed with EA during Brutal Legends‘ development. For two weeks the Double Fine staff is split into four teams. Each team then “forgets their current project” (hence the name ‘Amnesia Fortnight’) and becomes focused on a prototype for future games. Schafer saw it as away to expand the company’s revenue by ultimate making the four prototypes into complete downloadable arcade or PC games. A task that has proven to be successful.

The past Amnesia Fortnights have lead to the creation of some of Double Fine’s current quirky little games including Costume Quest, Iron Brigade, and helped form the basis for Sesame Street: Once Upon a Monster. While in the past Schafer has normally name picked the winners, he wants to do something different this year by including you in the process.

Double Fine has partnered up with the Humble Indie Bundle to create the first public Amnesia Fortnight. For a simple donation of $1, donors can be active participants of the whole experience. The first week (which is currently going on) grants you access to the voting process. A total of twenty-three game ideas have been presented to the public; each one thought up and presented by a Double Fine employee. Small descriptions as well as a video pitch are available for the public to see regardless if you are a donor or not.

After the week is up, the top four games with the most votes will move on to phase two. The Double Fine staff will split up into four teams like they do every year and will begin the prototype process. 2-Player Productions will be filming the whole 2 to 3 week process which will also include a live stream in order to keep the gaming community involved with the games’ production.

I have yet to see a post from Double Fine explaining whether or not the video aspects of the project will be for donors-only or be open to everyone. They have, however, expressed that those who do donate will get the prototypes for Windows with Steam keys – meaning that you have an opportunity to be apart of the early production of a future great game or be able to brag that you own a extremely rare, limited release of a game that will never be completely developed.

On top of the four prototypes, donors will also be given prototype copes of Happy Song and Costume Quest to catch them up on a bit of Amnesia Fortnight history that they can mess around with now. It doe seem that a second Humble Indie Bundle will be released once the prototypes are released giving the general public a second chance to jump into gaming history.

Double Fine is greatly encouraging player feedback to farther help these titles in the future. So why miss out especially when its only a $1?

And, of course, like every Humble Indie Bundle, donors can choose how much is given to the developers, Humble Indie Inc., or charity. On Double Fine’s official post about the project, they made sure to highlight the “donating to charity” option, somewhat encouraging donors to favor Child’s Play over them.