7:47 PM on 11.15.2012 (server time)    0
Hey there! If you're like me, you often hesitate entering a game franchise on a sequel. Depending on the type of game, I usually want to start at the beginning and work my way through. I'm secretly playing Halo CE: Anniversary because I've never played a Halo game and I want to play Halo 4.

I've been a long time fan of Guild Wars, ever since the original game came out in spring 2005. Naturally, I've been playing and enjoying the recently released and long-awaited sequel, Guild Wars 2. With the free trial event that's taking place this week, it occurred me that there may be a subset of gamers who are fascinated by Guild Wars 2 but perhaps afraid to get into it purely because they never played the original, and might think they're missing out on something. I get that - I understand being put off by the "2" at the end. Or maybe you are playing GW2 without having ever played the first game and you find yourself wondering about the backstory or the races, that sort of thing.

This post is intended to briefly cover what I think are the key things to know about the original Guild Wars. None of this is required to enjoy GW2 in the slightest, but I suspect having context would really add that certain "something" for a lot of people. Also I haven't blogged in a while so this gives me a reason to.

Campaigns
Guild Wars originally existed as a single game with a single storyline. Later on, a new, standalone campaign was released and it was called Factions. To better differentiate the two, the original game was given its own subtitle and it is now referred to as Prophecies. Finally, a third campaign was eventually released. This was Nightfall. I'll go into the differences between these, but first it's important to note that Factions and Nightfall are NOT considered "expansions". They are entirely independent games with completely new stories and they can be purchased and played without owning Prophecies.

Prophecies
The original Guild Wars game takes place on the continent of Tyria. Humans are at war with the big feline race call the charr. At the beginning of the game, the charr call down this big storm of fireballs that destroys the human kingdom Ascalon (this event is called the Searing) and forces humans out of their homeland and across Tyria to another human nation, Kryta. Without going too deep into detail, the story takes you further all across Tyria through a jungle, a desert, snowy mountains, and finally a volcanic island. The gist of the story is that there's an evil Lich Lord who acquires a magic sceptor and gains control of an army of beings called the Titans. You defeat the Lich Lord and eventually cut off the source of the Titans and that's a wrap. Keep in mind I'm trying to be very brief. It's a lot better than I'm making it sound. :) 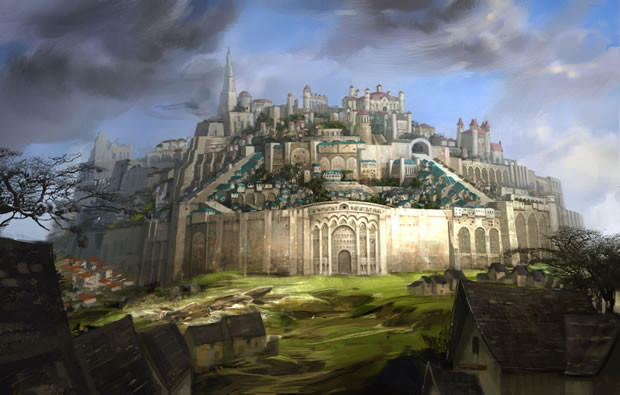 
Sylvari - A new race has suddenly appeared in Tyria, just 25 years before the start of GW2. Sylvari are plantlike, born from a giant tree that was planted during the time of Prophecies in the jungle.

I think that should just about do it. Now you have some context, hopefully. The story of Prophecies isn't really all that relevant to Guild Wars 2 - the big thing you need to know is the relationship between humans and charr. Currently, neither Cantha nor Elona play any role in GW2 but it's definitely possible ArenaNet will have us explore them in the future.

Like I said, none of this is required to understand or enjoy Guild Wars 2. It just serves as backstory.

If you play Guild Wars 2, you'll quickly figure out the basic plot: the five main races gotta come together to defeat the dragons.

If you've got questions about Guild Wars, feel free to ask! I've also read one of the novels that takes place a few years before GW2 (and I've started the other novel). If you're really interested, I might suggest you check out the Guild Wars wikis to do some more detailed reading of the campaigns stories.
#ShareonCommunityBlogs
Login to vote this up!