Halo 4: Trying to reinvent the ring.

It goes without saying that I'm kind of a Halo fanboy. With several blogs on the series over the years, one in just the past week, and release-day, limited edition purchases for every game but Halo 3: ODST (since it was just a controller pack-in) since the second, one could say I likes me some Covie-smashing. Being as immersed as I have been in the franchise for this long, Halo 4 is something of a dream come true, with content pulling from some of the extended universe and basing itself directly on obscura from earlier games themselves. At the same time, the more objective gamer in me is finding the latest Halo a bit ridden with mixed messages, given some of the things 343 Industries seems to be doing to bring in new playership and go head to head with BlOps 2, and I can't help but say something about it. 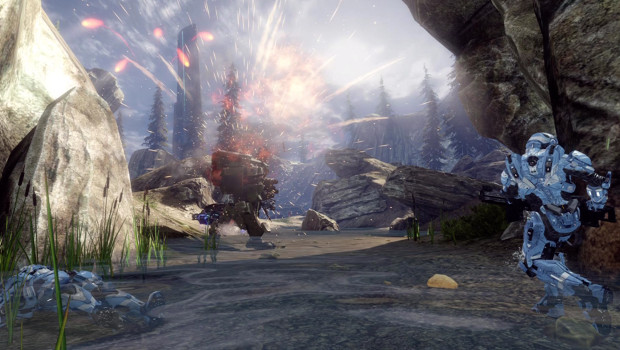 A beginner's guide, or perhaps a shooting gallery mode on-disc, would do wonders for indoctrinating new players in the subtleties of Halo's rainbow of gunny-shooty goodness, and avoid potential distaste and abandoment of the game by newblets who keep getting spanked by firepower they don't even understand. Such modes have been around as far back as Perfect Dark and its actual, hub-world firing range, if not earlier, and I distinctly recall encountering a basic training level in the first Modern Warfare modeled after a military training exercise, despite the aforementioned familiarity to many of current-gen, military hardware.

None of these issues are buzzkills, by any means. I love Halo 4 as much as I've loved any of the other Halo games, I'm having a great time, and in all honesty, I can't put it down. Though one look at my profile could probably tell you that much, what with the rank of SR-45, half the campaign and both Spartan Ops episodes done on Legendary already, and around 300 games across all modes under my belt already despite the game having only been out a week thust far. 343 just overlooked a few things in its efforts to live up to Bungie's legacy in the eyes of the sometimes rabid, fairly insular and very dedicated Halo fanbase, and as someone who'd like to see the Gospel according to John-117 spread to as many as possible, they could've made it a bit easier to introduce people to this new trilogy, and secure an even wider following for the fifth game's likely move to the successor to the 360.

If I had to put a number on it, these few shortcomings would knock my rating of Halo 4 down to a 9.5, maybe even a 9.0, but that's still the makings of an amazing game, and I encourage anyone and everyone to try it out, regardless of how deeply entrenched it is in its own mythos at this point. If you have any questions as to what's going on, feel free to ask me, I guess. It's not as if I like talking about Halo or anything.
#ShareonCommunityBlogs
Login to vote this up!