7:33 PM on 11.10.2012 (server time)    0
It's funny what random things can spark video game memories. Yesterday my wife and I went to a barbecue out at a friend's place in the countryside. It's about 30 minutes outside of Nelson and the drive is filled with beautiful scenery.

Anyway, I won't bore you with details of the barbecue, but it was dark by the time we started driving home. My wife was driving and I'd had a few drinks so I had a nice buzz going on. We were traveling along a relatively straight piece of highway and up ahead in the distance there was a crossroads. A white car was stopped on the left side of the crossroads, and you could tell that they were judging whether or not they had time to cross before we reached them. They made a decision and accelerated across the road in front of us with plenty of room to spare, and I watched as the car receded into the darkness off to our right. Watching all of this immediately made something click in my head, and after thinking about it for a moment I realised that it reminded me of Road Rash! Somewhere in the depths of my brain I related the image of that car accelerating through the crossroads with the crossroads in Road Rash where cars would accelerate in front of you, quite often causing you to smash into them and go head over heels down the road. All of a sudden I was overcome with the urge to play the game, but it was pretty late by the time we got home so common sense won out and I went to bed. 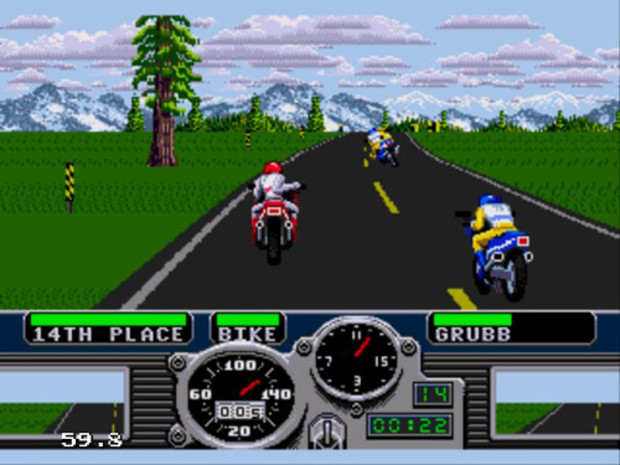 Incidentally, searching up "Road Rash" images on Google is quite horrific and I wouldn't recommend it

When I woke up this morning, however, I brewed some coffee and loaded up the Megadrive emulator on my Wii. The remainder of the morning was filled with Road Rash goodness, and weaving my way through those crossroads (sometimes successfully and sometimes not) is just as thrilling as I remembered. I can honestly say that the game still holds up. It really is one of the most fun racers ever made, and it's made me hungry for a new Road Rash game.

How about all of you out there? What type of random things have reminded you of video games?
Login to vote this up!