4:01 PM on 11.09.2012 (server time)    0
Last night, as is traditional for me on a Friday night, I stayed up once my wife had gone to bed so that I could get some game time in. I was at a loss for what to play, so I had a scroll through my games that I'd downloaded from PSN and came across Journey. I hadn't played Journey for quite a while, and the idea of taking a trip through its world appealed to me so I loaded it up. 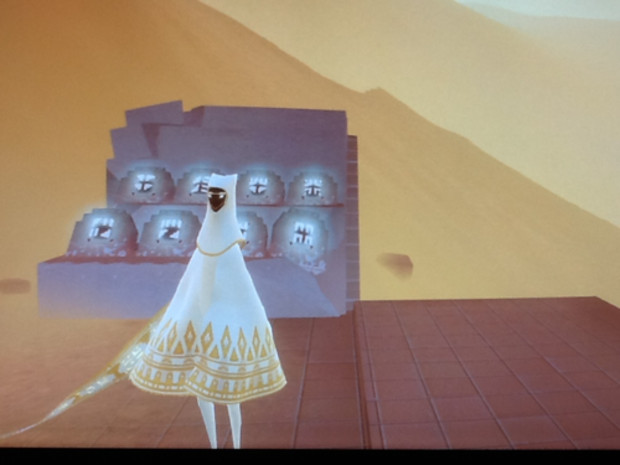 We greeted each other with the traditional bleeps and bloops and chimes, and then set off. I let my companion lead the way and they proceeded to show me all the secret places and glowing glyphs that I hadn't yet discovered on my earlier journeys. We developed a language where they would stop moving, chime three times, I would chime once, and then we'd both jump and fly off. We spent the majority of the game airborne, which is something I hadn't experienced before. By staying close to each other we constantly replenished our flight time which meant we rarely had to return to the ground. I honestly had the biggest grin on my face throughout the whole experience.

Each time we completed a stage I expected that my companion might leave and I would meet up with another traveler, as had happened on my earlier journeys, but each time I entered a new area the same companion was there with me leading the way. It was totally awesome. We stuck together right to the end. Just before entering the final canyon which leads to the ending cinematic we both drew shapes in the snow. The first thing that occurred to me to draw was a smiley face. I drew a big circle and a mouth and my companion realised what I was doing and proceeded to draw the two eyes. It was the perfect ending to what was the best multi-player experience that I've ever had.

Upon returning to the title screen I immediately closed the game and sent a message to my companion thanking them for the great experience, and they replied straight away with a similar message. I'll say again, now, thank you to pleiades6 for such a fantastic Journey.
Login to vote this up!