The Public Library and Xbox Live

3:05 PM on 11.07.2012 (server time)    0
I’ve been going to the library quite a lot lately. I used to go to study, as I’ve recently moved towns, and into a busier house back with my family and getting any work done from home was difficult. I get terribly distracted at the best of times and overhearing loud conversations, having the latest Rihanna album pumping in the next room or even just having my ten year old sister come and interrupt me and enquire about what I’m up to, then interrupt me again while I explain what I’m doing, and then tell me about whichever friend she’s fallen out with this week for hours. Not actual hours, but whatever measure of time these conversations last it is removing hours from my life. I’ll die younger because of that craic.
I know this is first world problems; I’m not really complaining. I’m just giving some context to why I like to remove myself from this situation.

But I don’t need to study anymore as my next module doesn’t start until February next year, but I still go to read or do some writing with a bit of peace. People are noisy and obnoxious, and I have a very small attention span so it helps me be a bit more productive.

Well, that’s the idea, but unfortunately that ideal of the quiet library doesn’t seem to exist for me now. The main area where most of the books are displayed doesn’t have any seating and at the back of the room is a busy section with thirty or so computers, and there is another section down a long hall which does have a large table and chairs is right next to one of the entrances and a helpdesk, so there are people coming, going and enquiring all the time, which also distracts me.
The only option I have left is a large room on the second floor called The Sanctuary. Perfect. A sanctuary; I like the sound of that, it’s exactly what I’m looking for.
Essentially it’s a large room with a number of sofas at the back and four tables scattered around the room, along with six computers lining the sides, three on each side. 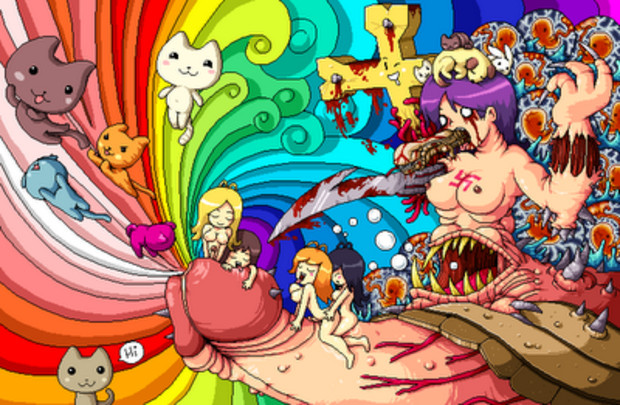 What I’m trying to get at is why is Xbox Live singled out for the worst part of human nature when even a particular day at the library can bring out the rude? As I pointed at before, anonymity can exacerbate social situations but they’re not the root cause.

I dunno. Maybe XBL does attract a slightly higher proportion of wankers, but that didn’t seem to be the case when I first joined back in 2006. I met loads of great people playing Gears of War, and some I still speak to. I’d jump into a game and speak to pretty much anyone and usually got a fairly positive response but as the reputation of the XBL gamer became more and more infamous I stopped turning my mic on for online sessions unless I was with someone I’d previously met, because of dicks I heard about on the internet and didn’t come across first hand very often.
It just makes me wonder if the XBL gamer stereotype is a self-fulfilling prophecy. People who aren’t arseholes are jumping in games with their mics off and not communicating with each other, and the mouths ruling; they’re winning. Maybe if I stopped thinking of myself as above the community I could rediscover a love for online gaming by just turning that mic on again because online gaming in 2006 was brilliant.
I may not have a 360 anymore but I may just wipe the dust off my PS3 mic and see if there are any cool folks out there.
Login to vote this up!