A Fistful of Consoles: The End of the Console War 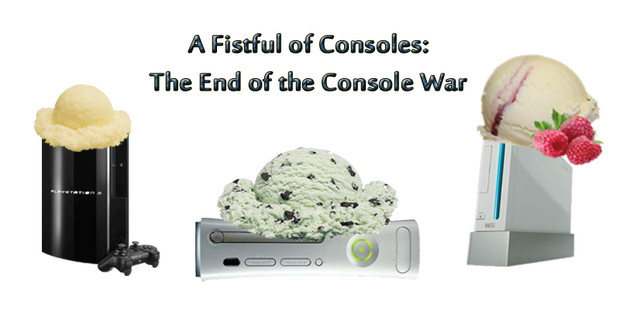 Remember the great console war of the seventh generation? Cries of “Filthy casual!” and “Microsoft fanboy!” thrown about online forums. The piercing whistle of a Wii-mote as it passed your ears, missing its target by mere centimetres.

I’m probably exaggerating (a touch), but regardless, the “console war” was something a great many people took very seriously. Since a lot of us couldn’t afford to buy all the consoles, communities of gamers became divided based on what console they had purchased.


Those who fell on Microsoft’s side were first out of the blocks, with far greater hardware than the previous generation, a growing list of exclusive games, and a dedicated online service. The folks in Sony’s trench, two years later, had the benefit of even more advance hardware, a free online service, and the capability to play Blu-ray discs. Those in the corner of Nintendo were able to experience the first real implementation of 3-D motion controls in gaming, as well as a slew of first party Nintendo exclusives.

But like any great war, there were losses on all sides. The Xbox 360’s hardware aged quickly, and its online service became plagued with advertisements despite the Ł34.99 entry fee. The PlayStation 3’s online service suffered from being released 2 years after the 360’s, which already had a large install base, as well as constant firmware updates. However, possibly the most tragic of all, the Wii received very little third party support, and after being barraged with mini games and sports titles, public opinion of Nintendo (and motion controls) had plummeted.

Now, I know what you’re thinking: “Insolence! My beloved PlayStation/Wii/Xbox is nothing like the sugary iced treats consumed by infants! I am an adult! Get out you Microsoft/Sony/Nintendo fanboy!”

In spite of those well-constructed arguments, I still believe that videogame consoles and ice cream are exactly the same. Here’s how:

The Xbox 360 is Mint Chocolate Chip

Manly, chunky, and pretty ordinary; mint chocolate chip is satisfying to eat, it just isn’t particularly interesting. It manages to be a jack of all trades, master of few; a flavour enjoyed worldwide because it’s there, it’s easy to find, and it means you won’t have to try more exotic flavours if you don’t want to. If I were to abandon any notions of subtlety, I’d say that mint chocolate chip is also green (Xbox colours) with specs of brown (Gears of War) on it. Conclusive proof if ever I saw it.

The Wii is Raspberry Ripple

Unassuming, inoffensive; raspberry ripple is pretty much impossible not to like a little bit. But at the end of the day, it’s basically vanilla with a bit of fruit chucked in for good measure. You can feed it to your kids and there’s no danger of them loosing teeth on hard bits, and they’ll probably end up flailing their arms around in the living room from all the sugar.

The Nintendo Wi- raspberry ripple also beat its competitors in terms of sales, so it must be popular right? Well if you think that, you aren’t a real ice cream fan. True enough raspberry ripple appeals to those of us who are looking for a more casual ice cream experience, an experience also available in the form of mobile ice-creaming.

The PlayStation 3 is Lemon Sorbet

Those of us looking for a more polished, “up-market” gaming experience, can sample the exotic, fragrant flavours of a lemon sorbet. It’s clearly more advanced than its competitors, but it costs a lot more, so you probably won’t find it in as many households. Clearly impressed with their more “artistic” flavour of ice cream, the manufacturers of lemon sorbet often get a little arrogant, making outlandish claims about their product that they can’t inevitably stick to.

Hold that lemon sorbet under a microscope though, and it’s pretty much a glossier version of Mint Chocolate Chip. An acquired taste, but certainly no less valid in today’s ice cream market.

I couldn’t think of one for PC because there is no Steam flavour.

There you have it! Irrefutable evidence that consoles and ice cream flavours are exactly the same. We should all learn to love our favourite brand of ice cream/games console, all the while accepting its glaring faults. We should also learn to live in harmony with the other flavours/consoles, and respect that they might do things differently from time to time.

You may not like a certain flavour or ever want to eat it, but if somebody, somewhere gets enjoyment out of it, that can only be a good thing.

Of course when the Wii U (I’m going to say Neapolitan flavour) releases in a month, things will go back to normal. Lines will be drawn in the sand. Controllers will fly. Console mascots will be born. Forums will be set aflame. Motion controls will be used.

Because: war. War never changes.
#ShareonCommunityBlogs
Login to vote this up!