A look into the future: The Wii-U impression


Sometimes, if I'm up early enough, I have this urge to walk out. When I do go out, I go to the nearest Gamestop, which takes an nearly an hour to get there by walking. Most of the time I don't have a good reason except my own boredom. I just walk and listen to music. Today, Gamestop had a Wii-U station and the demo they had playable, at the time of this writing was Rayman: Legends.


Contrary to what the pictures have shown, the Wii-U is surprisingly big. Take a PlayStation 2, lay it on its side, and stick the disks in the side, and that should give you an idea of how big it is. It's not as big as a PlayStation 3 or a X-Box 360, but bigger than the original Wii. The controller fits in your hands like a glove. It's smooth and easy to hold. The four main buttons and the d-pad is stregitaly placed to make each button easy to reach. The feel of the buttons feels like a 3DS pad, and the analog sticks feels like what analog sticks should feel like. If there was one gripe about the controller it is its weight. Holding it with both hands will serve no problem. Holding it with one hand will make you notice. It's not that heavy, but through extended use with only one hand, the wight will present itself. You will feel the wight, and this is mostly due to the screen. 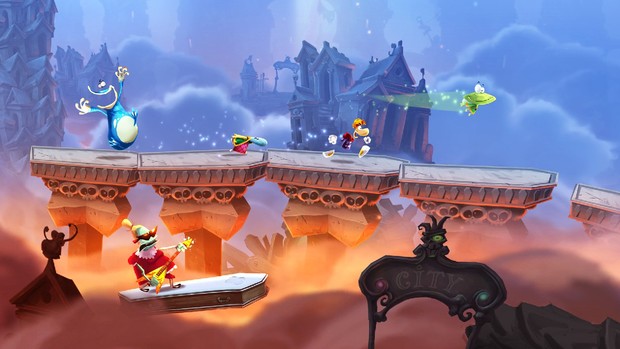 The second part is a little hard to explain. There are the music stages. If you seen the videos, then you know what to expect. Keep going to keep the music going, and you will have a fantastic time. The events around you, and what you do keeps to the music perfectly. There was a stupid grin on my face while I played it.

The Wii-U and Rayman: Legend is exactly what Ubisoft had promise. They put everything you love about Rayman and put it Nintendo's wonderful new system. Rayman: legend looks to be the benchmark of the Wii-U and the gold standard of what the Wii-U should do.
Login to vote this up!