It's time Game Over screens died in a fire, a horrific one

7:40 PM on 10.28.2012 (server time)    0
You know how when you like someone and they have this cute little trait or habit that might bring a little smile to your face now and then every time you witness it? Then after they go out with someone else or turn out to be a douche-bag you then HATE that fucking trait of there's, screw that little habit of there's, they can go shove that habit up their traitorous ass!

That mangled metaphor almost perfectly describes my strained abusive relationship with game over screens. They were once a cute little past time I was use to being met with upon death in a game but now I'm older and somehow even less impatient with a shorter temper for such fickle matters I now loathe game over screens.

So make yourselves comfortable in my theatre of ridiculous complaints as I cry and shout how awful game over screens are and why it's time we abandon, retire and abolish the nuisances. 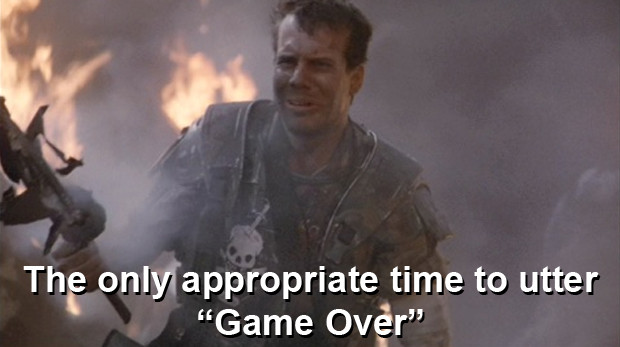 With all that said and done I realize this is an incredibly stupid topic to talk about, I sound like a huge cry baby who's banging his spoon against the table as he launches his plate into the air which proceeds to cover the kitchen in baked beans.

But its something I've never been able to get over all the way back since I was a kid, it made me angry then and it continues to make me angry now. Granted I should probably be more mindful it's just a game, cool down and not take things so seriously but in the mean time I can't help but feel these game over screens are largely useless. Games with arcade sensibilities or atheistic I can understand but little modern games dig deep into convincing me these are a necessary concept.

I guess until then I shall return to my crib and suck on my thumb till I descend into the land of lullabies and dreams...
#ShareonCommunityBlogs
Login to vote this up!