An Open Letter to the Gaming Press

9:08 AM on 10.28.2012 (server time)    0
There is no doubt Robert Florence opened a can of worms with his Table of Doritos article over at Eurogamer. Most of us know about the article. It was about the relationship between the games press and PR. I won’t go into the contents in detail as you can read it here.

Now I’d rather be here writing about how awesome Persona 3 is or what I think the direction horror games should go in, but considering what has gone on this week in regards to the gaming press I feel I have to address it. 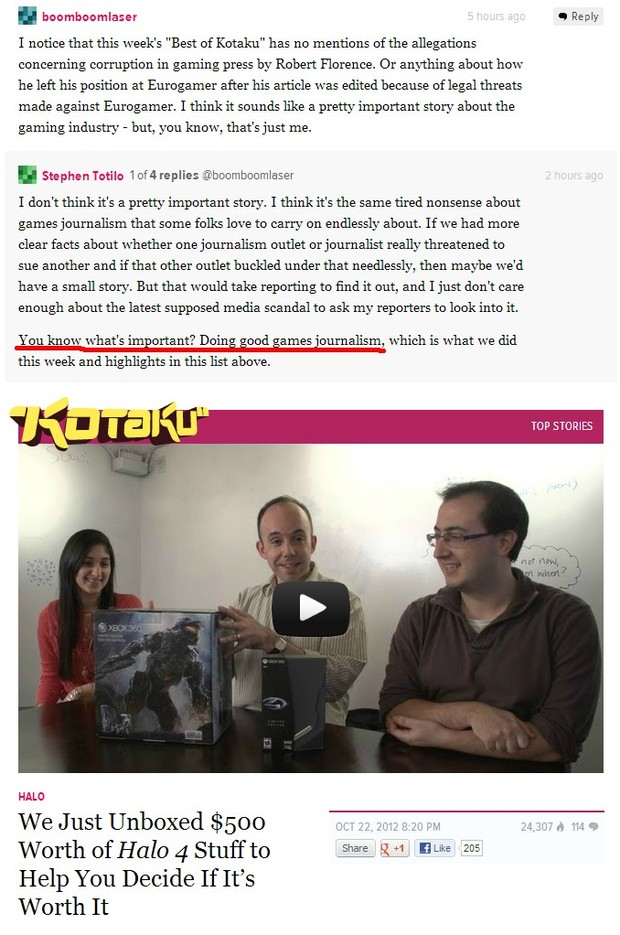 Looking at what I’ve already written I can see that I may be preaching from a high horse, sneering down like a king at a pauper but I do understand how the lines can become blurred in an entertainment press and PR relationship. We’re hits on some counter, we’re Likes on Facebook, and we’re bullies with bad grammar on Twitter. We’re statistics.
We are not the personalities you have to deal with day to day and we’re not the people you generally have to maintain some kind of relationship with. And games PR are probably as passionate a gamer than anyone, I mean who else wants to work in the games industry at that level other than a gamer, so having something you both care about in common will likely end up in friendship. This is a persistent relationship that you just won’t have the majority of your readers, so I can see how a relationship with PR can become quite strong, and I totally believe it to be unintentional; people with the same interests connect.

I know this comes across as a buzz kill as some may say it’s only video games, we shouldn’t be taking them so seriously, but some of us do really care about them. Some of us may look up to some of you as thinkers. The ones whose career it is to think about games and pass those thoughts to the rest of us who perhaps don’t have the time to analyse for ourselves due to pesky day-jobs but one of those thoughts may strike us and makes us realise something we never noticed before in a particular game. Then we apply this theory, whatever it is, to other games and start to demand better.

It’s through good criticism you can potentially help make better games, but your readers need to trust you or it’s all for nothing.

From the outside it looks like there is a lack of self-awareness in the gaming press with their relationship with industry PR and all I'm asking is to just take a step back every-now and then and consider if you're closer to the industry than you are your readers.
#ShareonCommunityBlogs
Login to vote this up!