Not fit for man, the beast. 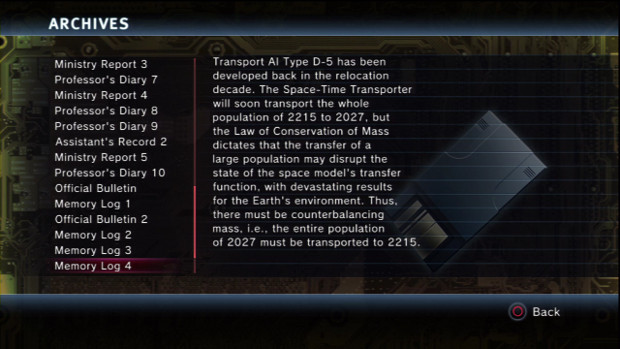 As if that weren't dastardly enough, consider that, according to the logs that outline the game's story, said future population has been cut to ten thousand people due to some disaster, and they're trapped planetside by space debris. Considering the fact that 2027's world population, barring any disasters of its own, is likely to be somewhere a bit over seven billion, you're looking at a trade-off of 700,000 people for every person saved by this crazy scheme. Every single survivor, complacent or not, would be individually accountable for the combined kill counts of the Belzec and Jasenovac (upper estimate) concentration camps of the Nazi regime during the Holocaust. Think about that.

While the game's events, in a way, make those who set these events in motion accountable for their crimes against their forebears, albeit in a somewhat bittersweet fashion, it doesn't make the mere thought that people could actually resort to such a tactic any less reprehensible. With Tokyo Jungle, Sony and Crispy's have done wonders to remind us that, sometimes, we can be our own worst enemy, and have a responsibility to not let our personal greed lead to oblivion for our species en masse. In all fairness, they probably got what they deserved once Tokyo's future was handed over to the rest of the animal kingdom.


* - The lastest DLC pack, which features said salaryman, also bears a Homo erectus character, but it's doubtful he was part of the populace originally hanging around in 2027.
#ShareonCommunityBlogs
Login to vote this up!