How i'd have made 007 Legends good: Thunderball.

I don't like speaking for other people, but i'm fairly sure that no Bond fan does. We buy these games to play with Q's gadgets and to explore exotic locales and fantastical hidden bases... hoping to throw out some dry one-liners in the presence of a stunningly beautiful woman whilst foiling the mad schemes of a criminal mastermind (who probably suffers a physical deformity) along the way. You know, Bond stuff.

With 22 films worth of solid gold to draw inspiration from, it's shocking - positively shocking - that Eurocom failed to deliver on virtually every front. I will never get over how disappointed this game left me, but i have never been the sort of person to point out problems without having an idea or two on how to improve a situation, so would like to share my thoughts.

Films and games are obviously quite different, and you need to make changes in order for a FPS action game to be fun to play, but if you choose the right films you can do this while staying true to the source material. As an example:

Eurocom didn't fail completely. They built a game around the iconic Bond finales of the older films. The villain's personal army, usually in bright outfits, fighting ninjas or the US military or the loyal followers of a likeable Greek smuggler, in a bizarre hidden lair.

The final Moonraker mission was probably the highlight of the game. In zero gravity, Bond, Dr Goodhead and Jaws battle Drax's guard with lasers on a crumbling space station. Then the US army shows up. It was ridiculous, and not at all fitting with the current Bond, but at the same time kind of fantastic. Like much of Moore's tenure as 007.

The spectacular underwater finale of Thunderball, in which the US coast guard fight Largo's men with harpoon guns could work in much the same fashion. 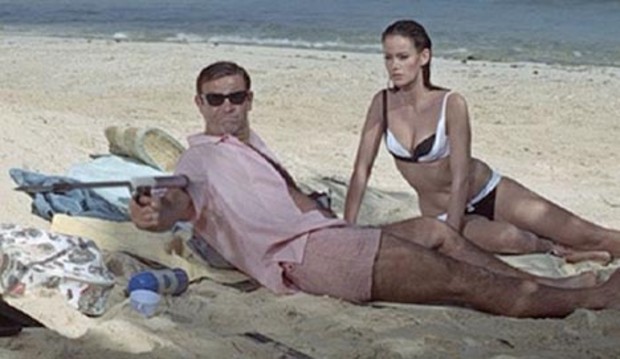 The player is given one shot to make sure Largo's man gets the point. A bit of a gimmicky mechanic, but the player needs to get to relive this moment.

With Domino on board, and the location of Largo's base, it's time for the final level. I've already spoken about the underwater battle between the US military frogmen and Emilio's private army, but before that part of the stage i think it important to include something that makes use of one of the films other memorable gadgets: the watch with the built-in Geiger counter. 007 is on the hunt for some stolen nuclear missiles after all.

Perhaps Bond needs to use it to traverse a maze-like warehouse, before being caught by Largo's men. Domino is then taken to Largo while Bond is tied up, though quickly freed by Felix Lieter and his men, who then gear up and dive into the ocean to take on Largo's army.

During the underwater battle Bond would have to make his way to Largo's vessel, the Disco Volante, and kill him. I see this encounter as another QTE, but again, the non-lame kind, like Heavy Rain. With multiple paths and differing outcomes - though if you hit the notes you'll win, just in different way. or example, one route to victory may end up with Domino making the kill with a spear gun, like in the film, but another may end with Bond taking the shot himself.

I don't like to rely on QTEs, but a big part of Connery's period as Bond was the ferocity of unarmed combat. The fight on the train in From Russia With Love was brutal, and there isn't really any other way to recreate that.

Other villains lend themselves to other methods of play. I think that The Man With the Golden Gun would be a fun one to include, for the climactic battle with Scaramanga in his funhouse. I see this as being a bit like Metal Gear Solid's The End battle, with a variety of ways offered to draw Bond's target out, but just as many to give away his position allowing Scaramanga to hit him with a golden bullet.

Anyway, i think that this is a pretty good way to break down one of the best 007 films into 3 and a half levels while conveying the plot, building the key characters and making sure Bond acts like Bond. It has the gadgets, interpretations of the iconic moments and couldn't possibly be any more difficult to make than what we got with Legends.
Login to vote this up!