2:24 AM on 10.19.2012 (server time)    0
So, I've been playing a bit of Skyrim lately. I bought it a few months ago for PC, but it's taken me a while to really get into it. I don't have a lot of free time to game, normally only on the weekends and the occasional weeknight, and Skyrim is a "gaming marathon" type of game. You can't really sit down and play 10 minutes of Skyrim and feel any real type of achievement or progress.

I'm 14 hours into the game, according to Steam. During these 14 hours I have gotten so close to losing myself in the world and lore of the game, but every time I get close something happens to wrench me out of the fantasy to put me squarely back in my chair in front of a computer monitor. For every sweeping mountain vista and impressively rendered and designed dungeon there is a jarring glitch such as a guard suddenly appearing in front of you out of nowhere or a character magically skiing across the ground without moving their legs. 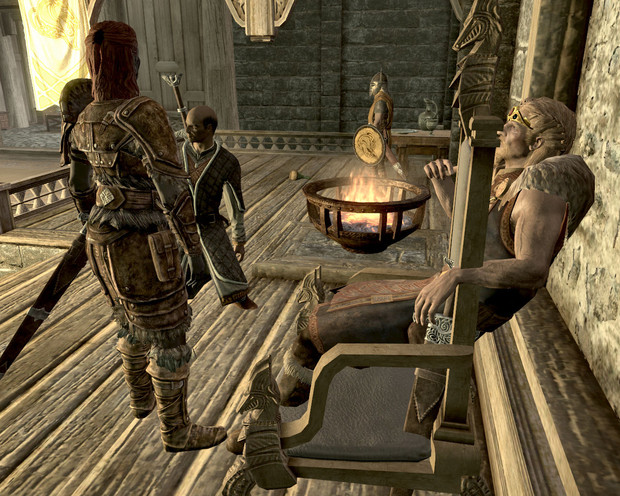 Now, I normally don't really worry about bugs or glitches unless they're game breaking or somehow cause you to lose progress or something serious like that. There have been many games where glitches have been hilarious, and in some games they actually add to the entertainment factor. With Skyrim, however, they're kind of starting to get on my nerves. I'm a huge fantasy fan. Fantasy novels make up the bulk of the books in my library. Skyrim, for me, represents an opportunity to get lost in a huge open world where you can cut your own path and create your own story. When you enter an Inn and ask a bard to play a song for you, causing a lute to teleport into their hands and then disappear just as quickly when they're finished playing, it definitely breaks the illusion somewhat.

Like I said, in many ways Skyrim is incredibly impressive in what it strives to achieve. Despite the issues I have I am genuinely enjoying the game, but I wish Bethesda had maybe aimed a bit smaller and polished the rough edges before they released the game. I would happily accept a smaller world to explore if it meant that I didn't have to deal with characters glitching in and out of existence on a fairly regular basis.

How about all of you out there? Do game bugs annoy you, or do you simply accept them as a part of today's big game releases?
Login to vote this up!