4:18 AM on 10.17.2012 (server time)    0
When PlayStation All Stars Battle Royale was first announced I had said that I was hoping that it was more like Marvel vs Capcom. Now that I have played some of the beta I still retain that belief. This is a blatant rip off of the Super Smash Brothers games with very little that makes it unique from that Nintendo franchise. The beta, released for PS+ members with a public released next week, is well made, and from the few matches I played didn't see any hick ups. I just don't think that the game itself is very exciting. In Smash, its a controlled chaos where you knew where you were at the whole time, in Battle you can't really see what you are doing. This is mostly caused by the camera being as far from the battle itself. It does get close when the players are together, but not as close as Smash. To make matters worse, when you and another person pick the same character your user name is not hovering above that character you had picked. This makes the fights more about finding yourself than actually fighting the other players. 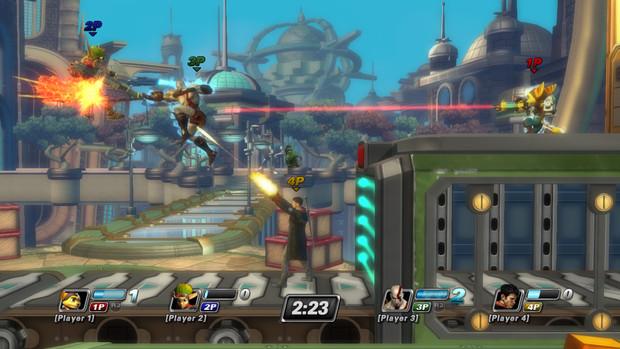 It's all not like Smash, though. The more unique stuff is the highlight of the beta. The are two maps you can play from, Metropolis from Ratchet and Clank, and Hades from God of War. During the match the map would change. In Metropolis, it would change from Ratchet and Clank to the three Hydra stage from God of War. The music would start as Ratchet theme, and it would seamlessly change to the God of War theme with out a misstep. It's pretty cool that they did that. While this is a beta, I just hope that the maps isn't fixed. I would love to see it change to Ratchet and Clank to Uncharted, or Uncharted to PaRapper the Rapper without a missing a beat to the music. Another thing is that the maps have death traps that relates to the map itself. Hades will attack you during the God of War map. It won't kill you out right, but it will make you in a daze.

In the long run, I can't see this being a big hit that Sony hopes to be. What made the Smash brothers such a huge success was the interaction with other players on one screen. This can be applied to Battle. It may be great fun with other players, but for online it will be severely lacking. It's got some good ideas, but it won't replace Smash Brothers in terms of gameplay and interactivity.
Login to vote this up!