Dishonored, Retro City Rampage, and the Death of the Sixty Dollar Purchase 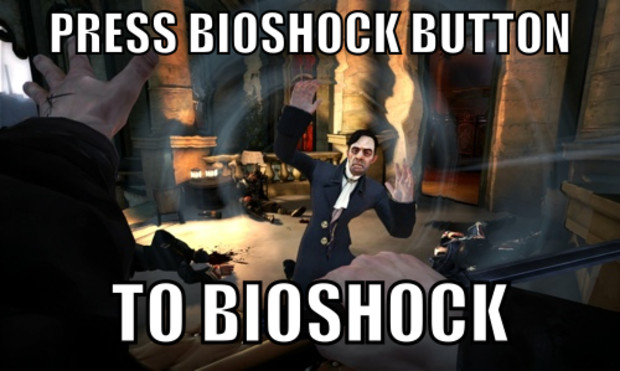 Last night I played through the first hour-ish of both Dishonored and Retro City Rampage. Fun was had all around. Still, this lethal cocktail of digitally-delivered-nostalgia and surprise-AAA-hit-of-the-holidays has unexpectedly opened a can of worms I can now never close. A flurry of considerations surrounding the contrast between these two games has been forced into my attention. As each universe unfolded its rules, discoveries, and learning curves, the stark difference became impossible to ignore. The price-points, the proverbial packaging, and of course, the pure joy of playing; they all point to one conclusion.

I am done with AAA games.

To be clear, this is not a slight on Dishonored. I am definitely liking the game thus far, and it has succeeded as far as peaking my interest. The problem is that, now that digital distribution and indie games have become a movement, the silhouette of the AAA game has become somewhat defined. Before, when there was no other product to stand next to, the commercial release was just a video game, plain and simple. With indie games having the freedom to forsake formula, the template that forms the AAA game is clear. The sad fact is that most AAA games are not afforded the freedom to escape this template, and all their innovation must be exercised within the established framework. Dishonored is a game that wants so badly to provide you with something new, but there is only so much it's allowed to accomplish.

I want to explore what makes Dishonored unique. I want to toy with its "Chaos" system, which uses your tendency to sneak or kill as an input to affect the condition of the game world. More kills means more guards, more rats, and more plague. However, hours of exposition, walking from checkpoint to checkpoint, and accomplishing pedestrian tutorial tasks stand in between the player and the core of the game. The idea of tactical freedom is almost enforced onto the player, but a lot of the freedom that Dishonored affords the player is illusory. I am free to choke out an NPC, at the consequence of failing the game, and restarting from my last save. NPCs ask me if I am ready to move on to a new locale, but the choice to stay behind begets absolutely nothing, apart from the odd coin or potion here or there. Furthermore, the game is a unique sum of familiar parts; certain elements are immediately recognizable from earlier games. The easiest comparison to draw is Bioshock, from which Dishonored borrows it's loot system, it's magic system, and it's central agenda as a narrative driven, tactically-open FPS set in a kind of both-past-y-and-future-y-at-the-same-time alternate reality.

My time with Dishonored begs the question, "what is this game about?" Is it about the story and setting, an oppressive alternate reality which beneath its surface is not so different from our own? Is it about the player, who's character is examined through the exercised freedom to kill or remain unseen? Recently, I've been feeling more and more like the condition of AAA games is that they have no idea what they're about. They'd like to be about something visceral; they'd like to communicate something to us, but that message is lost amidst a wash of familiarity.

I think price point has a lot to do with the homogenization of the commercial game. Because we as consumers can only afford so many AAA games a year, games like Dishonored have to jump through a number of hoops in order to prove their worth as a must-have purchase. Things like Hollywood voiceover talent and multiplayer modes have become staples of the industry, whereas the creativity and the courage to do something different has become risky business. And now this has gotten so bad that a game like Dishonored, which provides a new-ish and interesting framework for the player, but never requires the player to perform an action that hasn't been learned from an older AAA game, has become a RISK IP!? However interesting its art direction and however novel its handful of spells can be, I cannot honestly say that Dishonored does anything risky at all.

For all these reasons, when I shut off Dishonored for the night, I knew that for a part of me, there was no going back. Not once I had experienced all the vicarious joy of Brian Provinciano's excitement that oozes from every pixel in Retro City Rampage. Then I finally once and for all knew that I had no reason to ever pay $60 for a game ever again. Not when a $15 game is afforded the luxury of complete freedom. Not when a designer can sell you a dream come true. Not when I can once again play a game and feel like I am having a conversation with a human being, not being told a fairy tale by a screenwriter. This is it; the point of no return. The titans are finished with me, because I no longer want what they have. I'm sick of looking for the sliver of innovation hidden in all the layers of the same old song and dance. I've defended these games for way too long, saying shit like, "yeah, but the [whatever system] was really cool." I'd rather play a 5 second game that looks like Adventure and is built out of pure creativity, than some 40 hour Hollywood-ass game that wants me to do the same shit I've been doing for a decade.

So, here's my little personal revolution against the AAA monster. Next time a commercial game is coming down the pipe with some halfway interesting setting or concept that catches my attention, I am going to take the $60 I would've spent on it, and I am going to burn it. No, just kidding. I am going to take that $60, on release day for whatever AAA game, and I'm going to buy 5 or 6 indie games with it instead. I don't care how many Call of Duty and NBA 2K games the monster publishers have planned; they are fighting a losing battle, and I'm sick of playing for their team.

In the words of Eddie Murphy/Janet Jackson:

Did you like Dead Space? We've got a Dead Space threequel coming out... with co-op... and...

GTA5 is our largest sandbox to date and we're bringing back...

I've spent the last decade popping off critical-hit-head-shots, snapping to cover, pressing shoulder buttons to throw grenades, completing mundane fetch quests for NPCs, crouching to perform a silent kill, and watching the counter on my in-the-distance checkpoint tick down.

But what have you done for me lately?
Login to vote this up!