Gameplay is very simple; each player has a number of white answer cards that have a variety of things written on them; people, places, objects and actions. A randomly chosen "card tzar" will pose a question from a black card and the remaining players will place a white card answering the question on the table. The card tzar will then pick his or her favourite answer card and the person that played the winning card will win the question card. Then a new card tzar is selected and we start over. Simple. 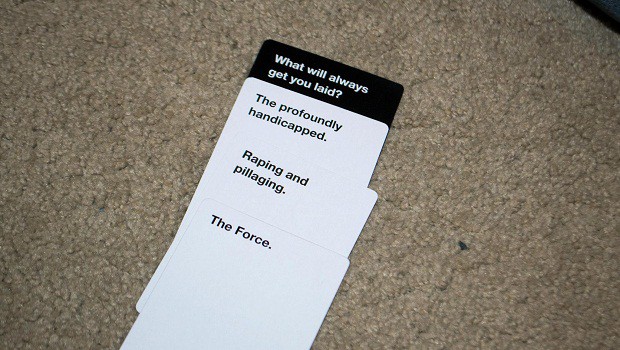 Photo via Beccy Caine. I was the one who selected The Force and I won. Naturally.

As someone from the UK, some of the specifically American references went a bit over my head but there are blank question and answer cards in the main game and two expansion packs so you can flavour the game to your own regional tastes. Unfortunately the game isn't available in the UK (Amazon.com won't ship Cards Against Humanity to the UK for some reason), so you're going to have to hit up one of your transatlantic Dtoid buddies for a copy. If you can't wait, you can visit the Cards Against Humanity website for a downloadable cards that you can print off yourself.

Play Cards Against Humanity; trim some of the answer cards if you have to and keep the game brief. Do all this an you're guaranteed a damn funny time with your friends.
#ShareonCommunityBlogs
Login to vote this up!