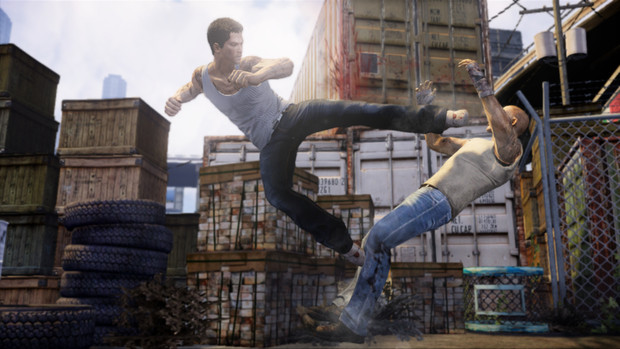 I accidentally just changed a guys race, by pressing square. Let me explain what I just did!
As the demo starts, a cutscene played that I didn�t pay any attention to at all. I mean really, I was looking at the subtitles, but if I could never recall a single thing mentioned there, other than the name dogeyes, which means nothing to me and sounds silly. I started off in a fast food resteraunt, which I promptly punched out the windows of, then jumped back across with a cool contextual press of the x button. Then I pressed square, kicking a guy in the face until it morphed and blood soaked it. I grabbed him with circle, then pressing square again, slammed him into the ground killing him.

This is a pretty bad ass game. After killing a few civilians, I then walked around the city streets and bought a soda from a vending machine, like any wild maniac killer would do. Then a nice lady sold me a soda that increased attack damage, while another guy sold me some noodles that gave me regenerating health. Virtual Hong Kong has all sorts of interesting things to see and do, I like that.

I feel bad for this game, it started off as some awful female protagonist having martial arts B-tier bullshit, then morphed into a True Crime game, which is somehow lower than the new IP no one wanted Black Orchid. When I think of what this could have been, I�m so surprised it turned out as amazing it has. This is actually a good game, one that I need to buy and play through.

Games Bought This month! How much money did I waste?

I�m looking to get into streaming videos, if anybody knows anything, let me know in the comments or email me at [email protected] and if you want to read some Bonerquest, ask me in an e-mail. Probably won�t finish the book this year, but next year this thing will come out. Just imagine had I knuckled down, it would probably be out in October instead of needing more polish and pieces of it scattered across my ipod, my email, and my laptop. I did get back a draft from the editor of the book, she seemed to think it was clever and funny. I hope I explained that factual information definitely influenced the book, but that it is a fantasy world, so when things aren�t exactly realistic, it�s done for comedic purposes. I�ve tried to layer the book in such a way that it means a bunch of different things, but first and foremost, it has to be funny. I can�t put out something that isn�t funny and ask you or anybody else to pay for it.

Oh and I'll be putting out some videos to promote Bonerquest